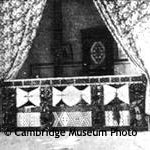 Maori history tells of a chief, Koroki from whom has descended the Ngatihaua tribe which subsequently occupied the Maungakawa hills and fought under Te Waharoa. Following a defeat of the Ngatihaua by the Arawa Tribe, Te Waharoa as a baby and his mother were carried off as slaves to Rotorua where they remained for 18 years. Te Waharoa did not rejoin his tribe until about 1795 when he had grown to manhood and then, by his warlike prowess, he established the ascendancy of his tribe in the Waikato. His son Wirimu Tamehana, made his headquarters in the Maungakawa hills, and it was to here that George Graham made his journey to persuade Tamehana to make peace with General Carey at Tamahere in 1865.

The settlement was known as Rewehetiki and in 1886 had its own policeman whose duty included charging 10/- from those wanting to shoot game across the Confiscation Line.

It was also at Maungakawa in 1890 that King Tāwhiao established his meeting house for his Maori Parliament, on what is now the property of the Muirhead family.

A Maori newspaper was published during the years 1891 to 1902. It was called ‘Te Paki O Matariki, Te Kauhanganui Maungakawa’ – ‘The girdle of the Pleiades’. The contents dealt mainly with reports of Tāwhiao’s meetings, discussions with Government, addresses to his council, laws and Gazette notices.

In June 1958 members of the Cambridge Historical Society led by Bob Muirhead, retrieved an old printing press from a gully on the Muirhead farm. This press is on display in the Cambridge Museum.

Also on that reconnôitre members climbed the hill on Clive Feisst’s former property on Flume Road to see remains of the only Maori redoubt in the district. All trenches have now been levelled by the plough.

Annual gatherings of Maori, who attended the parliament were reported in the NZ Herald and Waikato Times.
‘Maoris came from all parts of the North Island for the assembly of the Parliament, arriving by canoe, on horseback, in buggies, by train and on foot.’
‘A party of thirty men, women and children from Kawhia passed through Hamilton on Horseback.’
‘Two extra carriages were on the train to Cambridge for Maori from the north who detrained at Fencourt to proceed further on foot.’
‘Four large canoes with 200 natives arrived at Hamilton, camped for the night near the traffic bridge and proceeded to Cambridge.’
‘Cambridge reported the arrival by train of 400 en route to Maungakawa.’

It was during a burnoff and an unfortunate wind change in February 1908 that this meeting house was destroyed. Noted for its valuable carvings, it contained the throne and crown of the late King Tawhaio. Both were beautifully carved and the crown was inlaid with greenstone.

Rarely a day passed without a messenger checking that all was well and the Maori were annoyed that they had not been warned of the burn off. They had previously refused an offer of £800 for the carvings and valuable relics and Sir James Carroll had tried to persuade them to place the articles in a Museum.

The meeting house was capable of holding 500 people and at the time of the fire there were also several deserted whares.

Near the parliament building site are the remains of a dam and earthworks from an old flour mill. This flour mill was in operation by 1852 but in 1856 the Inspector of Mills reported in the Appendices to the Journal of the House of Representatives that it was ‘still unfinished.’ It had a pair of three foot scoria stones and cost £100.

An enormous amount of labour was needed to make the wheelpit and dam. The earthworks held back the Mangatatariki Stream until enough water was collected to drive the undershot water wheel.

The product of the mill was nearer to wheat meal than flour and the mill ceased operations in the early 1860s. This was due mainly to the fact that a better-quality flour was needed for the overseas market.

When the soldier settlers arrived in 1918 some of the mill machinery was beside the earthworks but they pushed it aside and covered it with soil.

The cemetery across the road from the flour mill site, is now a reserve of small hollows – all that is left of a once thriving community. In the 1960’s the remaining headstones were buried to stop vandalism and at that time the latest death date found was 1902.

It is not known exactly why the Maori left the district but in 1895 the Waikato Times reported on a virulent influenza sweeping through the settlement.

On the Te Miro Road amongst the rocks are the Kiwitahi Burial Caves – registered with the Waipa District Council as a protected historic place.