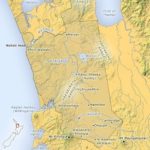 Part 9 of a history of the Karapiro-Maungatautari area by Te Kaapo Clark and Lyn Tairi.  This chapter takes up the history after the Battle of Rangiriri and the imprisonment of Tioriori.

After losing several battles the Kingitanga Maori retired to Maungatautari and established themselves at Te Tiki o Te Ihingarangi, where they modified the pa in preparation for musket warfare. By December 1863 they were ready and the pa was strong. The British realised this and simply settled down in front of it.

On 5 April [1864], after waiting three days, the Maori evacuated Te Tiki, probably because they had exhausted its supplies.  Ngāti Koroki had also fortified a hilltop by Whareturere, and a hilltop across the stream between the two. The new pa was called Porewa.

Wiremu Tamihana took Ngāti Haua home to Peria (near Matamata) and Ngāti Koroki left their homes to disperse into the bush, or moved south to Taupo. Those that stayed in the bush were able to live there without being detected.

Ngāti Koroki probably returned within the year when peace was negotiated and the aukati (confiscation) boundary line drawn up.  In December 1864 Governor George Grey signed a proclamation authorising the confiscation of 1,202,172 acres of Waikato land. (Later 314,364 acres were returned, leaving 887,908 acres confiscated.)  The aukati line ran through the middle of the Pukekura range above Karapiro, with all the land to the north being confiscated.  The local militia built a redoubt above Te Tiki o Te Ihingarangi, and an uneasy peace prevailed. Kainga (villages) destroyed by the troops would not be inhabited again, except for Te Wera a to Atua, which was not destroyed and was reoccupied. New homes were established at Tioriori and Taane.

Tioriori never fully recovered from the war, although he did continue his rounds with Tamihana.  He had lost a great deal of land by the confiscation.  Also as the Weekly News said in his obituary “being kept in prison is a great punishment for a Maori chief, and [Tioriori] never quite recovered his influence and spirits.”  Tioriori died Friday 6 September 1867 at Maungatautari.

Posted in Uncategorized
Next