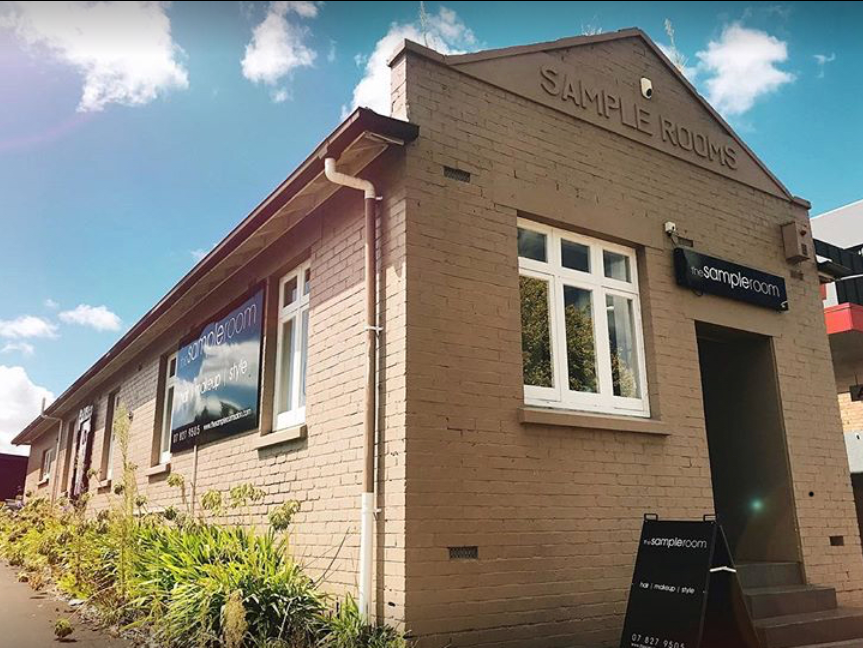 The Sample Room Salon is well known in Cambridge for its hair and makeup services.  The business is named after the building it occupies in Lake Street (one down from the old National Hotel) which bears the inscription “SAMPLE ROOMS” on its frontage.  This article is a short history of the National Hotel sample rooms.

Hotels in the 19th century often occupied prominent street-corner locations. As was the case with the original National Hotel, typical mid-19th century hotels were two-storey timber buildings with a verandah and sometimes a first-floor balcony. Later hotels were constructed from brick and stone and were larger and more elaborate in style – as is the case with the existing building.

These hotels had many different types of rooms.  Dining rooms, public bars and private bars were usually on the ground floor, and sitting rooms were on the ground and first floors – sometimes they were located between bedrooms on the quieter upper floors.  Larger hotels often had rooms for smoking, reading and playing billiards, and some had sample rooms for travelling salesmen to display their wares.  Salesmen were regular hotel clients and it was in the hotel proprietor’s interests to cater for their needs.

The advertisement shown here appeared in the Waikato Independent on 24 October 1893. 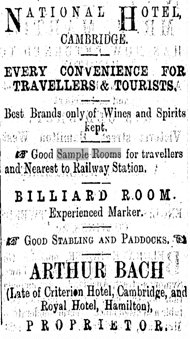 Advert for the Sample Rooms in Cambridge, Waikato Independent, 24 October 1893

According to a newspaper article dated 1 June 1905, “Ladies of Cambridge are invited to inspect a magnificent collection of Indian Hand Work, secured by Mr R. C. Pitt during a travel in the East.  Also Real African Ostrich Feathers, in Sample Room, National Hotel, to-night and to-morrow.”

After the original National Hotel and its sample rooms were destroyed by fire in 1912, local businessman Mr C H Priestley erected spacious new sample rooms behind his own premises in Victoria Street and provided a good description of how the interiors of these rooms would have been set out. They were “particularly well lighted.  The table fittings too are conveniently placed, and are capable of displaying a huge quantity of samples.  Commercial travellers are delighted at the excellent provision made, and the rooms are now in demand among the fraternity.”

After the National Hotel was rebuilt in 1912-1913, sample rooms were included at the back of the property.

In 1927, a plain brick building next to the National Hotel was completed – and this is the one you can see before you today.  The building has had many uses over the years: sample rooms, rugby changing rooms, scout hall – and is now the premises of a hair and makeup salon.

Posted in Uncategorized
Next