Thanks for signing up 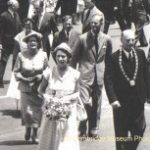 The Golf Club arranged to buy 130 acres on SH1 from the Defence Department in 1950 for £2,475. Plans then got under way to turn the course around to fit in with a new clubhouse and so the tenth hole became the first.
£11,000 was estimated for the building with voluntary labour reducing the cost by £3000. 250 people watched as Mr A H Nicoll performed the official opening on 13 August 1955.

November 1950 was special for the local Scouts as they opened their own, newly built hall on the corner of Duke and Williamson Street. William G Care and Ron Fisher were the main builders with the Rotary Club putting a boost into the fund raising.

Over the years the Scouting movement had its ups and downs but by 1957 it had grown to warrant Cambridge having its own District Association. The Waikato was divided into six districts and the Rev C E Hyde became the first Commissioner for Cambridge. Also at this time Miss Noeline Jamieson was presented with her Cub-master Certificate and Wood Badge.

The Korean War touched Cambridge in December 1950 as 7 local men left on the ‘Ormonde’ to serve with K-Force. They were farewelled with an inscribed wallet from the Borough Council, ‘hussifs’ from Red Cross, a ball point pen from the RSA and wishes of God speed and a safe return.

More men were to follow in 1951 and 1952. And they all returned in 1953, although Gunner Graeme Garland was one of two New Zealanders held as prisoners of war for nearly two years.

The farming sector was being revolutionised by the introduction of the buck-rake. Seabrooks Ltd, distributors of the Rosswood buck-rake, arranged a demonstration at Laurent’s property at Hautapu and several thousand farmers from around the Waikato attended.

Artificial insemination, whereby a bull could service up to 6,000 cows a season instead of 35 – 40 cows, was growing at a phenomenal rate. In a talk to Rotary, Mr S Southcombe of Newstead, related that the first experimental group of cows for artificial breeding was started by Mr Horace Watkins, of Fencourt. It was then taken up by Ruakura Experimental Station and 180,000 cows had been serviced by 1952.

On 4 April 1957 Whitehall settlers received their first supply of power from the Thames Valley Electric Power Board.

Also in 1957 the old saleyards in King – Vogel Street closed down and on 29 April the three auctioneering firms, NZ Loan and Mercantile, Farmers Co-op Auctioneering Co and Dalgetys, kept their faith in Cambridge as a major primary producing area and invested £18,000 in the new Carter’s Flat yards. (These were dismantled in 1985).

At the beginning of last century there were two sale yards in town – one on the site of the present Town Hall and the other in the Commerce Street area. These were closed in 1906 when the saleyards were moved to the King – Vogel Street site.

A new fire station was needed in 1920 but it was not until 1 August 1953 that a brick station was opened. The new station and two houses were designed by G R Stone and completed by Speight Pearce Nicoll & Davys Ltd for £14,821 15/3d. Mr Geof Sim, the local MP did the honours and the firemen’s wives provided the morning tea.

Mr Peter Lewis, the Fire Board’s chairman, said the volunteers, who were available 24 hours a day, provided a splendid example to all and deserved the best equipment and amenities the community could provide. Many volunteers have manned the brigade over the years with women breaching the manpower gap during World War Two.

The Jaycee movement came to Cambridge in 1953 with one of their first tasks collecting and selling about 18,000 drink bottles to aid the St Johns. At Christmas they started the popular Santa Around Town event, distributing ice blocks and lollies.

They gave firewood to the elderly and, with the local churches, placed Carols by Candlelight on a firm footing. In 1962 the ‘Cambridge Welcomes You’ signs were erected and 1967 the Farm Location Maps produced. In the 1970’s they moved into their own rooms in Vogel Street (the former Locheil Golf Club’s pavilion) and continued with their mission of helping others before themselves.

In 1995 the Jaycees folded. Although they have sold their rooms to the Cambridge Parent Centre they still use the interest from their investments to help others.

In 1953 a brick building for sports bodies was built in the corner of Victoria Square by the Cricket Club. It consisted of two changing rooms, kitchen, three showers, storeroom and conveniences for men and women. The cost of the building was to be £1,100 and the Cricket Club would contribute £300 and labour.

Queen Elizabeth II and Prince Phillip stopped in Cambridge for lunch on New Year’s Day 1954. At 12:30pm the St Andrews bells announced the Royal couple’s arrival and were soon drowned out by the cheering crowd. There were over 3,000 school children on Victoria Square and seating for about 7,000 was erected around the dais and cenotaph. A special train came from Paeroa as Cambridge was the official point for Tauranga, Te Aroha, Piako and Hauraki Plains people to see the Royal Party.

After Brownie, Judith Ford presented the Queen with a bouquet of flowers, the local body representatives then met the Royal couple. Lunch was held in the Town Hall which had been beautifully decorated by the Ladies Committee.
The town was decorated in festive red, white, blue and gold as the royal party left through Leamington for a forty-five minute visit to the Karapiro Power Station.

Later in 1956, through a public subscription, the steps leading from Victoria Square to the town centre were built to commemorate Queen Elizabeth II’s coronation.

The Panettiere Building in Duke Street was built in 1951 by SPND. Antonio Panettiere had come to Cambridge in 1925 and ran the fish shop and restaurant until 1969.

Ross Todds moved their firm of tractors, trucks, spare parts and service from Leamington and opened a new spacious building in Kirkwood Street in 1954. This had been the site of Crowther and Bell stables and more recently Lee’s Blacksmith shop.

Also in 1954 Speight Pearce Nicoll and Davys in Lake Street erected their new shop and office, (now Benchmark) and still the rounded entrance is unique.

Engineering and Implement Co Ltd in Lake Street (John Ferguson’s former smithy) was destroyed by fire in May 1957. The new building was erected by SPND the following year.

(The building firm of SPND Ltd had evolved as Harold Speight bought out the timber department of Souter & Co in 1908 and shortly after went into partnership with a rival timber merchant, Arthur Pearce. In 1910 an accountant Arthur Nicoll joined the firm and in 1913 builders Henry J Davys and son Henry E Davys completed the company.

Many craftsmen have worked with SPND and their quality workmanship can still be seen in many business premises and houses throughout the district. Over the years the firm has changed to Taupo Totara Timber (TTT) and now Benchmark)

1955 also saw the opening of the Cambridge East Primary school in Bowen Street. Although the school committee tried hard to keep the ten acre block for the school and kindergarten, the Minister of Education stated that 5 acres was ample. “Primary schools are being built to a maximum of ten rooms”, he said, “as when this amount of accommodation was exceeded the school became unwieldy and a new school should be established elsewhere.”

The Cambridge Museum came into being in 1956 when the Cambridge Historical Society was formed. The members started collecting and preserving local artefacts, archives and photos; they gathered information and started recording the available history.

The Museum has had many homes – at first it was in the front room of Poly Hill’s house, then in the Leamington Sub Station (now demolished), under the Town Hall stage, in the old Carnegie Library, and since 1984, in the Old Courthouse.

Because of the lack of storage space many large farm implements went to National Agricultural Heritage Museum at Mystery Creek. Every inch of storage space is now being used at the Museum as today’s history, as well as the past, is being kept for the future.

The Cambridge Croquet Club occupied the present Kindergarten grounds in Victoria Street from 1906 until it sold in 1959. They had bought the land from Mrs Murray of ‘Orongo’, on the corner of Victoria and Thornton Road in 1912. Later the club moved to Te Koutu Domain and has since amalgamated with the Leamington Club which was formed in 1932.

In 1959 Empire Street got a new block of shops, built for Webb Investments Ltd by Len Gerrand. Reg Buckingham, boot repairer moved into one of the shops, Mr and Mrs Jim Wood’s fruit shop and the Public Trust occupying another two.

At the same time J Singleton remodelled the Borough Council offices and SPND finished the Post & Telegraph line store in Fort Street and the automatic telephone exchange in Wilson Street.

The Amalgamation of Cambridge and Leamington came about on 1 April 1958. A merger had been recommended in 1950 but the Leamington people were most concerned about the effect on their rates. The Commission said that their administrative costs would be practically eliminated and this would relieve rates over the combined area. Leamington polled 192 to 161 and rejected the merger. Another poll in 1958 voted in favour.

In 1952, as speed was restricted on Shakespeare Street to 30 mph, the Nola Milk Bar and Dairy was erected by Mervyn Cubis – painted in Leamington’s blue and white colour scheme.

Cambridge & District Scottish Society held its first concert and dance in September 1958 in the Leamington Town Hall with their chief, Mr Ian Mathieson being piped into the hall by Doug Fullerton. Their success was great and a wave of membership applications brought their register to around 100.

At the same time the first Polio Injections were given at the Plunket rooms to about 500 Cambridge children aged between 2 and 16 years old. The second jab was due a month later.

1 October 1958 and bottled milk was delivered for the first time around Cambridge. The milkmen had to collect the milk from Frankton but it wasn’t long before the Hillcrest cool store was open.

In December of the same year Sputnik 111 was seen travelling across Cambridge skies.