Gardner & Sons were general merchants and importers who set up shop in Cambridge in the early 1900s. Their store was on the corner of Queen and Victoria Streets, where the Z petrol station is now.

Mr Manson Edward Gardner was born in Canada c. 1837 and arrived in New Zealand in the early 1860s. He settled at Charleston on the West Coast of the South Island and became a storekeeper during the gold rush there. He was new to Cambridge when he purchased the corner property from Mr Fred Popple and his wife Amelia. This property had a general store, which Mr Gardner kept, and several cottages, which he demolished to subdivide the land. Manson Gardner was described as someone with plenty of leisure time who loved to discuss national and local topics and was a regular frequenter of the library reading room.

Gardner & Sons supplied groceries, ironmongery, drapery and general merchandise. The business did so well that within a year, it spent over £500 ($85,475 now) enlarging its premises. A two-storey addition was made to the rear of the main building – as can just be seen in the faded image below. Under the stairway leading to the upstairs room was a cooling chamber which kept butter, eggs, bacon and cheese. The ironwork used in the construction of this cellar was 10cm thick and imported from Sydney, the material being unobtainable in New Zealand at that time.

The upstairs room was fitted with shelves and used as a showroom for their large stock of crockery and glassware. To safely transport fragile packages in and out of the room, a lift was constructed which opened into the yard.

Each of the ground floor windows were protected by five iron bars. The yards were securely fenced off with galvanised iron, and the gates fitted with Enright’s patent self-locking latches. The timber used in the construction was kauri.

As the Waikato Independent reported: “These architectural improvements to the town speak well for the progress and enterprise of Messrs Gardner and Sons.”

In February 1907, the family built a 10 room residence “Rahui” on Queen Street (pictured). Rahui has several meanings in Maori, the most appropriate being “sanctuary”. 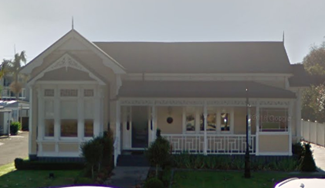 Rahui still stands as a well preserved example of the Bay Villa period.

Two Gardner family weddings were held in Cambridge. The first was for second daughter Lilian who married George Heath of Nelson in 1905; and the second was for third daughter May, who married Kenneth Court (cousin of George and John Court – department store owners) in 1910. Both married at St Andrew’s Church and the guests were then entertained at a wedding breakfast at the Gardner home: Lilian’s wedding at a previous residence, and May’s at Rahui.

Manson Gardner died in 1912, aged 75, and was survived by his wife Margaret, five daughters and two sons. Margaret died in 1936 at age 80 and was buried near her husband at Hautapu Cemetery.

Posted in Newsletter, Articles
Next