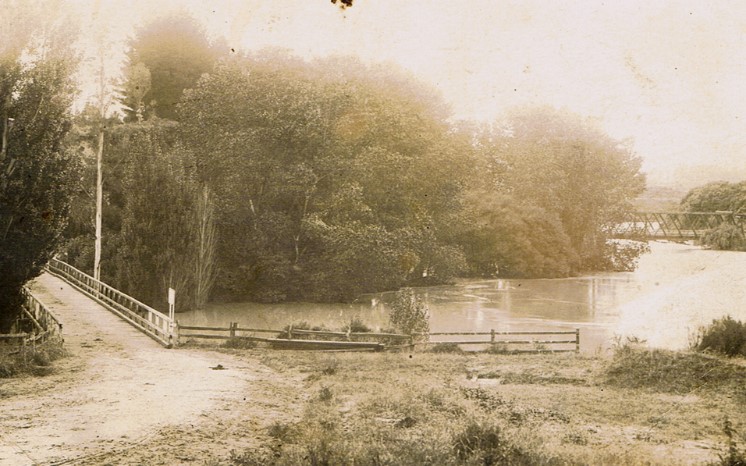 We do not have the full name of the writer of this excerpt from a letter to Kenny Wilkinson dated 27 May 1958.  “Nui” is talking about the Karapiro stream which runs under the Karapiro bridge just below the Duke Street hill.

The flooding he refers to was in February 1958 – a period of heavy rain which brought flooding to many parts of New Zealand, cutting off lifelines and causing extensive damage in some areas. Waikato was the worst affected region.

The above photo is from an Edwardian postcard.  The old Karapiro bridge (left), with earlier low level bridge to Leamington in the distance (right).  The Karapiro Stream runs left to right.

“… What I want to refer to are my experiences of my many years from early childhood of the Waikato River and the once lovely Karapiro Creek.  My sister, Sally, on her last trip to Cambridge stood on the Karapiro Bridge and held a tangi when she gazed on the practically stagnant pond, which was once a clear rippling stream flowing over a bed of clear sand, wadable for miles, as far as the foothills of the Pukemako Range (about 5 miles).  I clearly remember my brother Jim and myself wading as far as Dougherty’s in preference to taking Thornton’s Road, and in seeing a hare climbing the bank at Breakall’s – it appeared to me like a miniature deer.  At a guess, I would say it was in the year 1885.

The creek was much warmer and wider in those days.  Much warmer than the river, as it was not shaded by willow trees, or choked in a narrow gut as it is in parts today.  But to get down to tin tacks.

My humble opinion of the last disastrous flood in the Lower Waikato – I hold with the opinion that there may have been no more volume of water in the river than during the previous big floods.  My reason for that belief is that the big wash-out at Arapuni Dam deposited so much sand that the bed of the river was covered with sand, so causing the flooding, and is now backing the Karapiro Creek so that it is an eyesore at the bridge.  Added to that, the effluence from the Borough septic tanks does not improve the situation.  Why in the world was the second septic tank erected where it is instead of towards Moon’s Creek, which would be preferable to the effluence contaminating about a mile of the creek.

You will no doubt remember what the river was like when that sand was intermingled with water.  It seemed to be of the consistency of bricklayer’s mortar.

When the gates at Arapuni were closed and the river practically empty, I expected to see a sunken barge of bricks which we as boys walked on, a summer level reached about chest high.  There was no sign of it – it was buried in sand.  We never troubled to learn the history of the wreck, and its story seems to be lost in oblivion.  The only one who may be able to throw some light on it is Major W Kay, well remembered to old “diggers” as OC of the NZ’s at Torquay, England.  His father had a brick kiln and made bricks.  The said kiln was situated on the flat just below the approach to the high level bridge.  If you are interested, I could get in touch with him …” 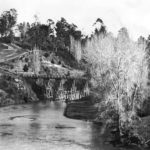