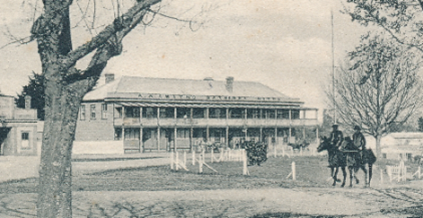 In our last issue, we introduced you to Mary Teresa Murphy.  Mrs Murphy owned properties and businesses in central Cambridge, and often appeared before the courts – as either defendant, plaintiff, or sometimes both.  She loved an audience and treated the court as her stage.  In this article, we will be reviewing some of her more acclaimed performances, with her husband Patrick in a supporting role.

As reported in our June newsletter, on 1 September 1881 we get our first glimpse of Mrs Murphy’s character as it appears in a Waikato Times article.  She was charged with assaulting Mary Ann Teague by punching her and then striking her with a billhook, apparently without provocation.  Sergeant McGovern who conducted the prosecution said that Mrs Murphy, when drunk, was a perfect pest to the neighbourhood.  Mrs Murphy defended herself by making a long statement on her good character which she said was well known to the police.  Sergeant McGovern said the accused had better not go to him for a character reference.

This is not a court appearance but the fact that the Waikato Times published this snippet shows that they knew Mrs Murphy well, and were not immune to the humour of the situation.  On 1 January 1885, it was reported that Mrs Murphy had won an auction to provide a temperance booth, serving tea and coffee at the Cambridge Jockey Club, which she described tongue-in-cheek as “a distinguished honour to serve the teetotal element of Cambridge”.

Later in January 1885, Mrs Murphy was accused by Ann Webb of breaking her windows, insulting her, and stating that if only Mrs Webb had owned her own house, she would have burned it down.  The case was dismissed, each woman having to pay her own costs.  Ann Webb was no stranger to the courts herself, having already been before the courts for swearing in a public place.  (Mrs Webb’s granddaughter became a Cambridge Mayoress.)

On 29 December 1885, the Waikato Times reported that Patrick Murphy had been fined £5 and court costs for assaulting Constable Brennan at his home.  The night before, Patrick had locked Mrs Murphy out of their home, and Mrs Murphy had countered by circling the house, smashing every window.  “Seasonable compliments were exchanged through the apertures in the glass, to the great edification and entertainment of the neighbourhood.”  The long-suffering Constable was called, and he suggested to Mrs Murphy that a trial separation would be timely.  Mrs

Murphy later told Patrick of Brennan’s suggestion, and the following night Patrick turned up at Brennan’s home, punching him for his interference.  Patrick ended up much the worse for the encounter and ended up in the lock-up with “a swollen … head [and] sore bones”.

A bit of a jam

Patrick Murphy appeared in court in May 1887 in support of Mrs Murphy’s claim for rent from the Jam Factory Company in Cambridge which had been leasing the carpenter’s workshop usually used by Patrick.  After the company went into liquidation, Mrs Murphy refused to let the owner of the plant take the plant away until additional rent was paid.  The plant owner accused Patrick of using the premises as his workshop after the liquidation, and refused to pay the rent.

According to Te Aroha News of 21 May, Patrick denied that he was working there.  He said that although it may have looked as though he was using the premises, he had had nothing to do “so I just went and hammered to give my wife and the people around the idea I had a lot of work on hand”.  Mrs Murphy lost her case.

The case of the one-armed man

In November 1890, Patrick was serving time in Mt Eden jail for one of his many drinking offences, when Mrs Murphy pressed charges against 45-year-old Bernard Fitzpatrick, accusing him of forcing his way into her home at 10.30pm one Friday night.  The newspaper report on the case does not reflect positively on the characters of Fitzpatrick, Murphy or Hugh Kelly, the mail driver, who said that he had been passing by and offered his assistance to Mrs Murphy after she ran out of the house “half naked and bare-legged” screaming “Murder!” and “Robbers!”  The one-armed Fitzpatrick disputed this story, saying that Kelly was already in the house.

During the court case, Mrs Murphy was “describing the position of the door and garden gate, when she tumbled head over heals [sic] out of the witness-box, which caused screams of laughter, and the constable demanding order to be kept, fully three-parts of those present had to adjourn outside and have their laugh out.”

The story presented to the courtroom was so contradictory that the Magistrate said that he should dismiss the case, at which point Mrs Murphy threatened to shoot him.  “She was at once taken into custody and was lodged in the lock-up by Constable Brennan.”

In a case entitled Patrick Murphy v. T Dennis (Waikato Times 7/11/1891), the particulars of the case are irrelevant.  All we know is that Mrs Murphy, the chief witness, caused “considerable amusement by her attempt to explain her method of bookkeeping.”

In May 1892, half the town crowded the courthouse and passage leading to it to hear Mrs Murphy give evidence in this case against Mr Browning whom she accused of assaulting her one Sunday afternoon at the National Hotel (pictured).

She had visited the bar on her way to Hewitt’s in the Criterion Hotel where she customarily ate her dinner.  Mr Browning was there with Mr Brunskill, who offered to buy Mrs Murphy a glass of beer.  Browning, Brunskill and Murphy were all from Limerick, Ireland.  Mrs Murphy, on accepting the drink, called Mr Brunskill a “countryman” of hers – and then Mr Browning made a joking comment that Brunskill was “more than just a countryman” to her.

Mrs Murphy took great offence to that.  Witnesses attested that she had called Browning “a Limerick bastard” or a “Rathkeale brat” or both.  Rathkeale is a town in west county Limerick, and she had allegedly said that “if he was one of the Brownings of Rathkeale, he would not be used to respectable women.”  Browning refused to apologise, saying “he had yet to meet a woman he would apologise to.”  She was just about to throw her glass of beer in his face, when the dinner-bell rang so she left the bar to have her dinner.

She then returned home and collected an old pistol with a missing hammer that had been given to her by her first husband, a policeman in Ireland.  Although the gun was unloaded, she returned to the bar to force an apology from Browning.  She pointed the gun at him and threatened to “blow his brains out” unless he apologised.

The gun was wrested from her, and Browning restrained her while the others called for a policeman.  It was then that Browning allegedly handled her roughly, and it was for this treatment that she was suing him £13 for the assault and £2 medical expenses.

On cross-examination, she said she did not know what the barrel or lock of a pistol was, “but I know what a lock-up is. I’ve been there.”

She lost her case and was left to pay costs of £3.  The public consensus was that her claim for damages was blackmail, and when the case was dismissed, the court erupted with cheers which were promptly suppressed.

Waikato Argus 14 January 1897: Mrs Murphy had no qualms about charging a 10-year-old boy for passing a valueless cheque at her shop in Victoria Street one Sunday.  Mills Stewart (10 years old) and Harold Kelly (6 years old) gave evidence that they had procured the cheque from Mills’ father and spent 6d on themselves before going home and giving their father the balance of the money.  As all the money was subsequently returned to Mrs Murphy, the case was dismissed.

The Justice, Mr James Shiner Bond, gave Mrs Murphy a lecture for trading on Sundays, but Mrs Murphy was not impressed, telling the court that he had “a down on her.”

Mrs Murphy sued 44-year laundress Maria Stafford for the cost of a shawl that had been lost while they were together on 13 January 1894.  “The plaintiff threw a tremendous amount of mud, but, notwithstanding, she was non-suited.”

Just after this report in the Waikato Independent was another where Patrick was charged with being drunk in charge of a horse and trap on that same day.  During the hearing of this case, Mrs Murphy and a “lady who had been summoned as a witness against her husband” fell foul of each other and the constable had to interfere, much to the amusement of the court.

Mrs Murphy chose not to conform to the social norms of Victorian society and, perhaps for that reason, very little has been written about her since her death.

We have no identified photographs of her in our collection.

She was violent when drunk, short tempered, unpredictable, and had no respect for authority.  She had friendships with women, but we know that several of these ended in acrimony.  Her daughter Minnie was not in contact with her when Mrs Murphy died in 1913.  We know that Minnie gave birth to son Philip in her mother’s house in 1890, but we do not know if she contacted her mother when she was left destitute after the death of her husband in 1894.  In Mrs Murphy’s will, signed two years before she died, Minnie was left a weekly allowance for 21 years, after which she would inherit the full estate.  The Trustees never found Minnie and her disappearance remains a mystery.

In 1881, Constable McGovern described Mrs Murphy as “a veritable pest to the neighbourhood” when she had been drinking. But men evidently enjoyed her company, and she clearly had a sense of humour.

She conducted business and managed her property assets until her death.  Her husband Patrick never shared ownership of her property.  He contributed by working as a carpenter in one of her commercial premises.  Unfortunately, Patrick was in and out of jail for various alcohol-related offences all his life. Despite this, she was fiercely protective of him, and their marriage was successful.  They stayed together for forty years and are buried side-by-side at the Hautapu cemetery.

Researched and written by Karen Payne.