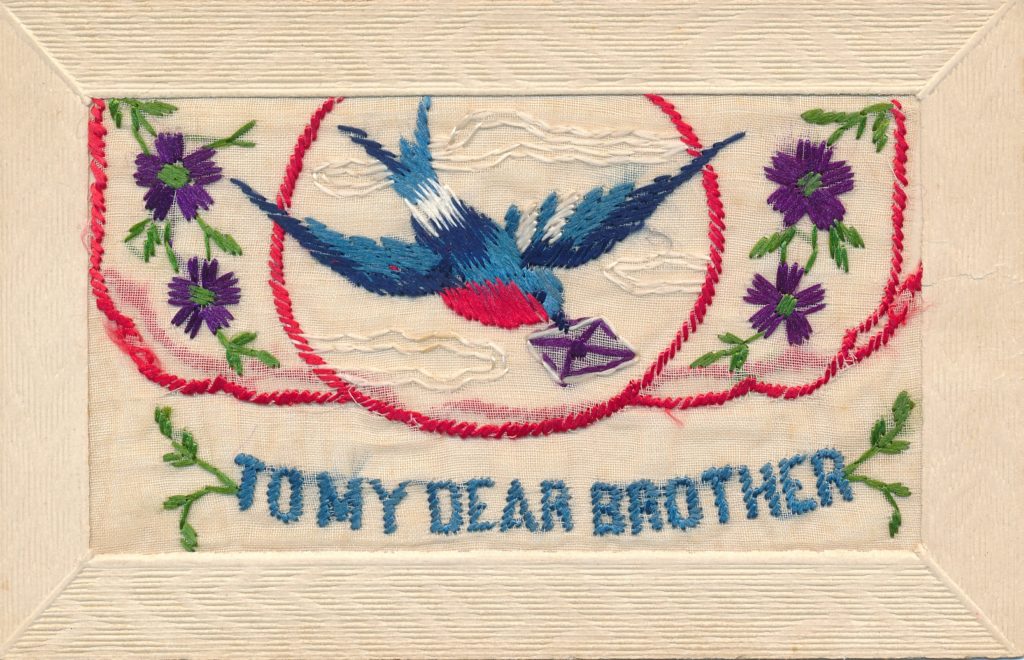 During World War One, Keith, Harry and Kenneth Armer sent postcards to their loved ones back home. Silk embroidered postcards were popular at the time.

They wrote about their lives as soldiers and imagined what might be happening at home in Cambridge. They rarely mentioned the dangers of life in the trenches.

Tragically, only two of the three returned home.

For over a hundred years, the Armer family have looked after these postcards.

They were on display at Cambridge Museum as part of Anzac Commemorations in April 2022. 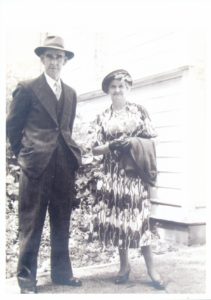 Keith, Harry and Kenneth’s family lived in Leamington in Cambridge. Their parents were called John and Alice. They had a brother called Leo, and four sisters called Doll, Lill, Blossie (Tot) and Zoe.

Their house on Goldsmith Street was surrounded by farmland at the time.  Take a look at this aerial photo of Leamington from 1939 to see how much the area has changed.

John died in 1920, and Alice continued to live in Leamington until 1944. She left 22 grandchildren and eight great-grandchildren. 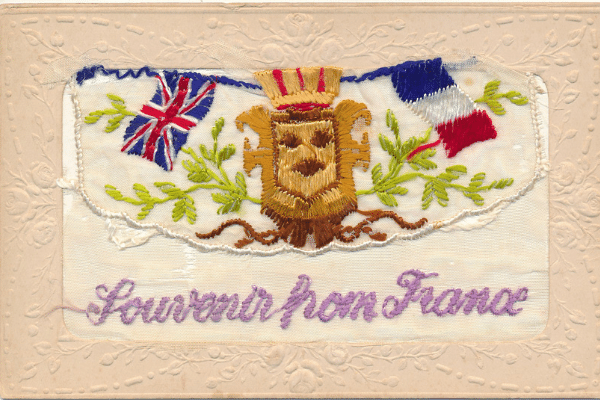 Embroidered silk postcards were especially popular during and just after the First World War (1914-1918). Keith wrote to his mother, “I got a few cards tonight I thought they were very pretty …”.

There was a range of embroidered designs available, including military subjects such as the flags of the Allies (notably Belgium, Britain, Croatia, France, Italy, Portugal, Russia, and the USA), names of regiments, figures of famous generals, and more public subjects such as Christmas, New Year and birthdays. There were also illustrations of butterflies and flowers.

3. Who actually made them? 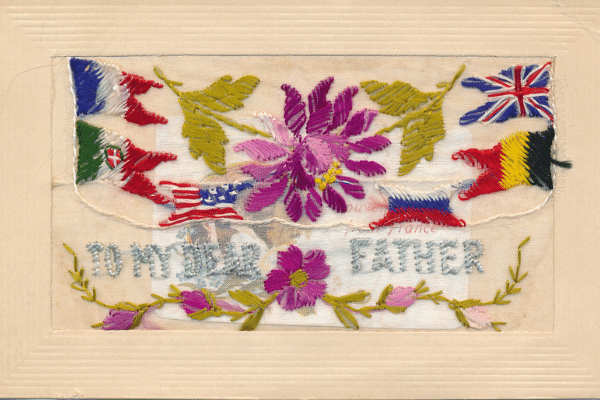 11 October 1917 – Dear Father, I wish you a very happy Christmas and a very happy new year. Well the weather is something awful just starting the winter and the muck is over our boots where we are at present.  From your ever loving son, Harry.

The designs and texts for the cards were worked in series with colourful, free style embroidery on silk gauze panels. The individual embroideries were cut out and stuck to a card frame that was embossed with a decorative edging.

It has been suggested that these cards were hand embroidered by Belgian and French women who had been afflicted by the war. However, it is more likely they were machine-made.

4. Postcards from the War

The earliest dated postcard in the collection is from Keith Armer.

As a student at Leamington School, Keith received awards for writing. He went on to work as an assistant bookkeeper at a store on Duke Street.

He joined the Wellington Infantry Regiment in 1917. As part of his training, he was sent to the Sling Camp in the UK. From there, he sent the first three postcards. 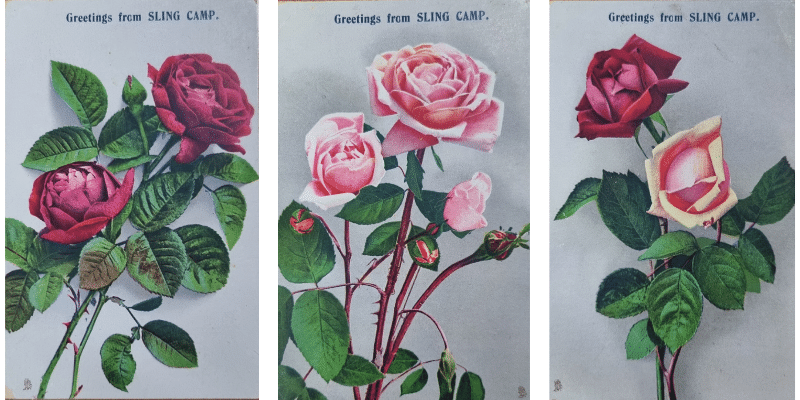 Three postcards written as one letter by Keith Armer to his mother Alice from Sling Camp, May 1917 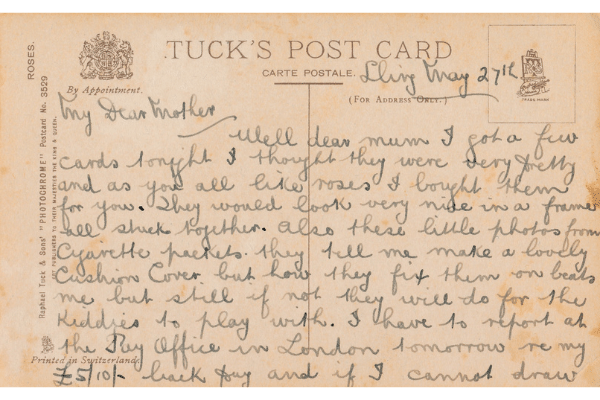 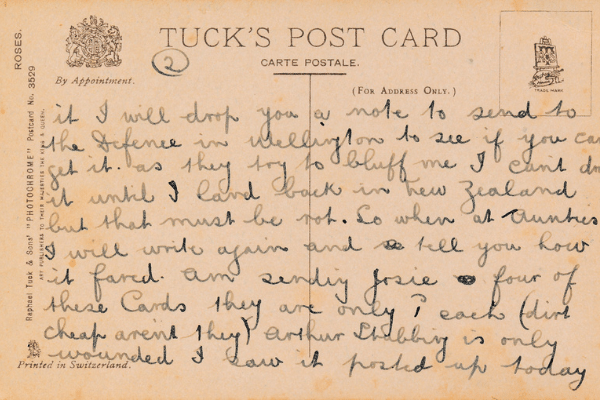 (Postcard 1) My Dear Mother/ Well dear mum I got a few cards tonight I thought they were very pretty and as you all like roses I bought them for you.  They would look very nice in a frame all stuck together.  Also these little photos from cigarette packets they tell me make a lovely cushion cover but how they fit them on beats me but still if not they will do for the kiddies to play with.  I have to report to the Pay Office in London tomorrow re my £5/10/- back pay and if I cannot draw

(Postcard 2) it I will drop you a note to send to the Defence in Wellington to see if you can get it as they try to bluff me I can’t draw it until I land back in New Zealand but that must be rot.  So when at Aunties I will write again and tell you how it fared.  Am sending Josie four of these Cards.  They are only 1d each (dirt cheap aren’t they).  Arthur Stubbing is only wounded.  I saw it posted up today

(Postcard 3) so there are all kinds of rumours going round here.  Everybody is cleaning up getting ready for the morning. Got wet thru today but changed straight away.  My cold is just gone off me and I am in good form so cheer up, Harry and I will soon be back.  This war can’t go over this summer now they are giving Fritz the very devil and they all start on the move together.

So goodbye for now with heaps of love and kisses, 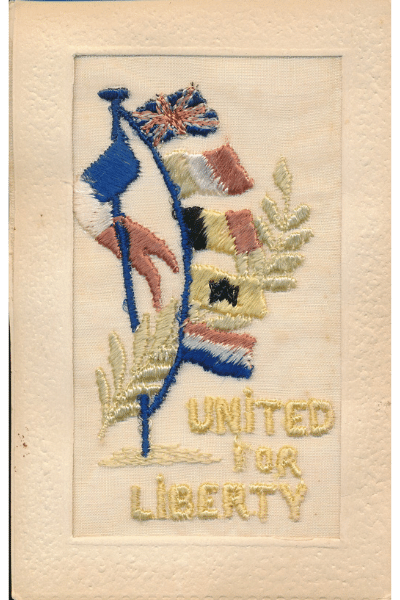 To Mrs J Armer, Cambridge, Waikato, New Zealand.  “With Keith’s best wishes and love for a good and quick ending to the old war. Heaps of Love, Keith. “

Well mum dear have dropped you another letter for you and Lill.  Everything is bustle here and we are getting loaded up today with ammunition etc for up the line tomorrow.  So au revoir with best love to you all. 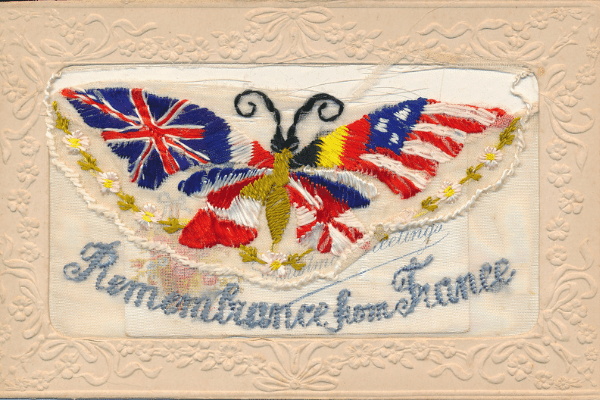 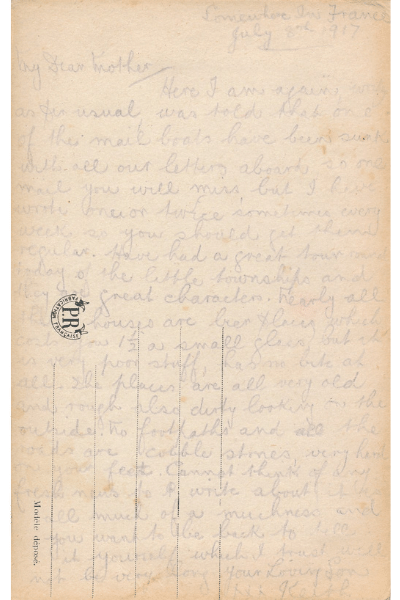 Here I am again writing as per usual, was told that one of the mail boats have been sunk with all our letters aboard so one mail you will miss, but I have wrote once or twice sometimes every week so you should get them regular.

Have had a great tour around today of the little townships and they are great characters.  Nearly all the houses are beer places which costs you 1½ a small glass but it is very poor stuff, has no bite at all.  The places are all very old and rough also dirty looking to the outside.  No footpaths and all the roads are cobblestones, very hard on your feet.  Cannot think of any fresh news to write about, it is all much of a muchness and you want to be back to tell it yourself which I trust will not be very long. 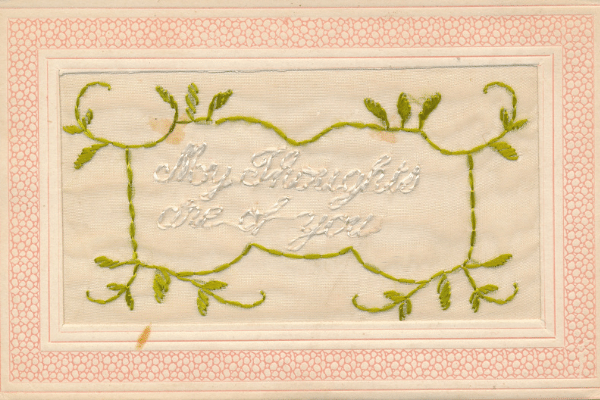 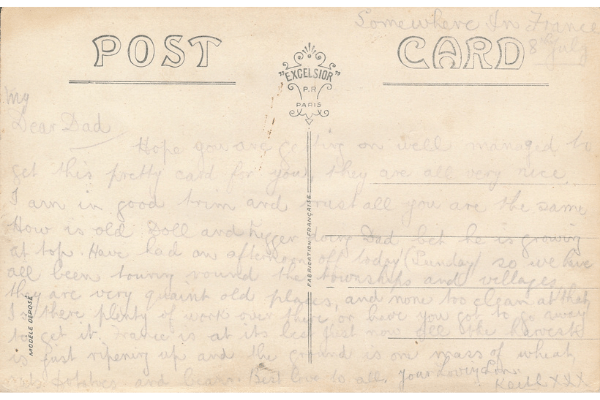 My Dear Dad, Hope you are getting on well.  Managed to get this pretty card for you.  They are all very nice.  I am in good trim and trust all you are the same.  How is old Doll and Tigger doing Dad? Bet he is growing at top.  Have had an afternoon off today (Sunday) so we have all been touring round the townships and villages.  They are very quaint old places, and none to clean at that.  Is there plenty of work over there or have you got to go away and get it.  France is at its best just now.  See the harvest is just ripening up and the ground is one mass of wheat and potatoes and beans.

Best love to all. 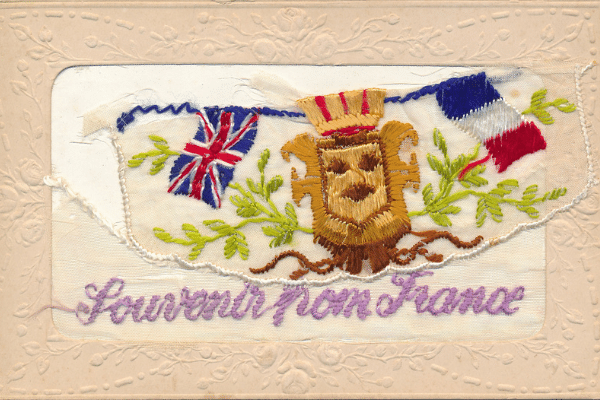 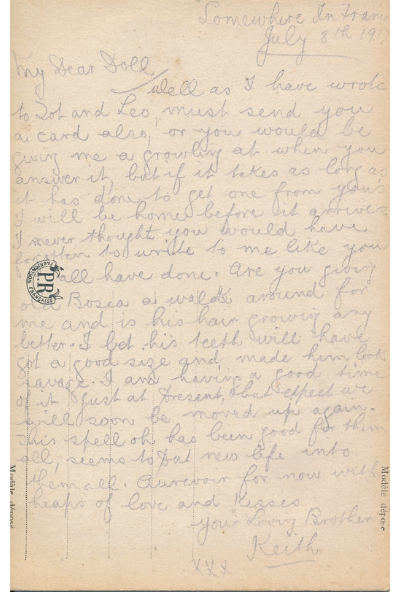 Well as I have wrote to Tot and Leo, must send you a card also or you would be giving me a growling at when you answer it, but if it takes as long to get one from you I will be home before it arrives.  I never thought you would have forgotten to write to me like you all have done.  Are you giving old Bosco a walk around for me and is his hair growing any better.  I bet his teeth will have got a good size and made him look savage,  I am having a good time of it just at present but expect we will soon be moved up again.  This spell oh has been good for them all, seems to put new life into them all.  Au revoir for now with heaps of love and kisses, 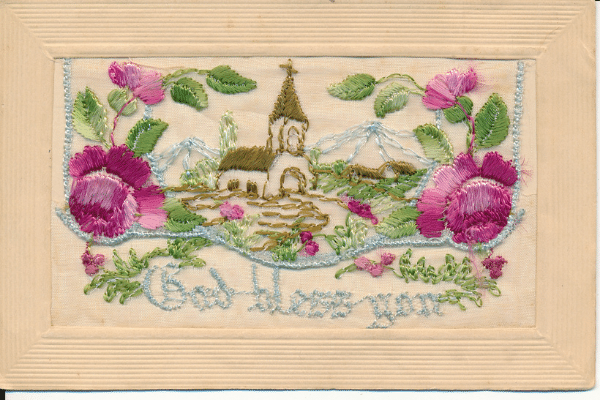 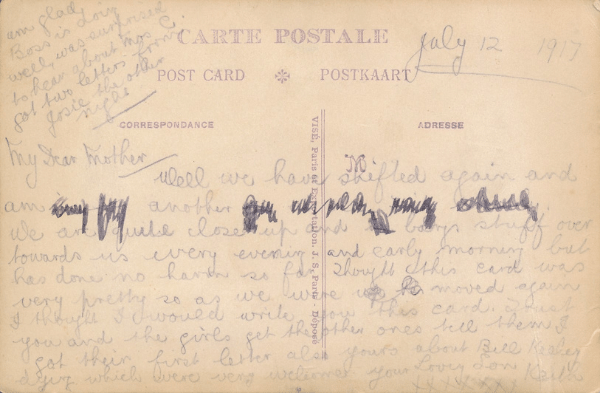 Well, we have shifted again am (censored out) another (censored out).  We are quite close up and (censored out) bangs stuff over towards us every evening and early morning but has done no harm so far.  Thought this card was very pretty so as we were moved again I thought I would write you this card.    Trust you and the girls get the other ones.  Tell them I got their first letter also yours about Bill Kealey dying which were very welcome.

Am glad Boss is doing well, was surprised to hear about Mrs C.  Got two letters from Josie the other night.

Keith was with the Wellington Infantry Regiment when the Hawkes Bay Company attacked and captured La Basse Ville in France at 2am on 27 July 1917.

At 4.45 am the enemy counter attacked using heavy gun fire.

Keith was one of 14 men reported missing in action after this battle. 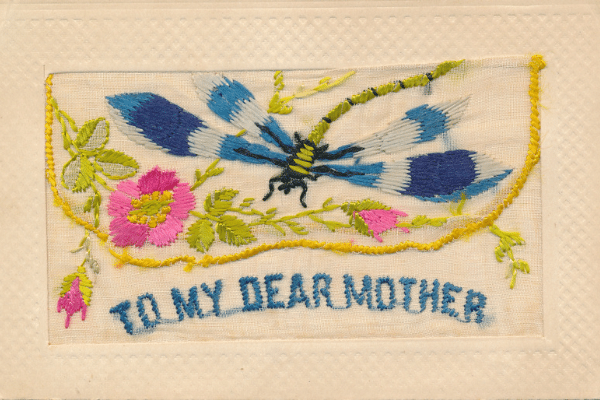 Postcard sent by Harry Armer to his mother, Alice in Oct 1917.

I am writing a line tomorrow as it is such a long while since I have written to you but I have not been too well the last month or so.  I have not had the pleasure of seeing Keith yet but it won’t be long now only about 2 or three days now” 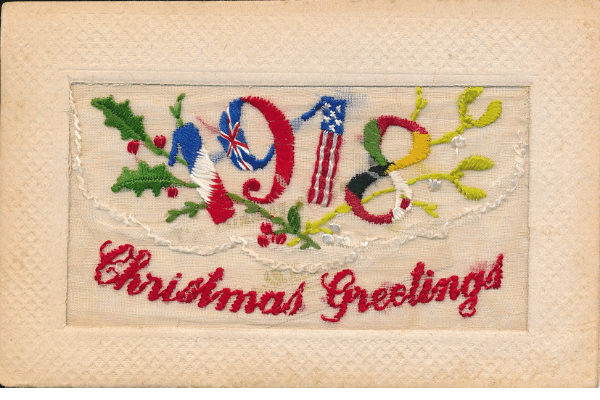 Dear Mum, Dad, John, Dolly and Leo.  Just a card wishing you a merry Xmas and a happy new year to you all.

From your loving son Ken XXXXXX

Harry and Ken survived the war and returned to their family in Cambridge.