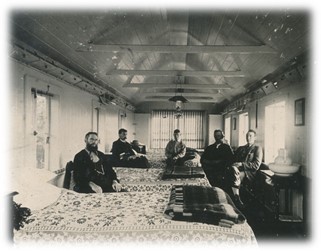 If you wander around Hautapu Cemetery in Cambridge, you’ll see headstones showing the names of soldiers buried far from home.  This article explains why these soldiers, who survived the war, moved to Cambridge to battle against a disease that was ultimately to end their lives.

In the 19th and early 20th centuries, tuberculosis ran rife through New Zealand.  It was the leading cause of death in settler communities.

Open air treatment and exercise, in beautiful surroundings, were considered to have both physical and spiritual benefits to tuberculosis sufferers.  Cambridge’s mild, dry climate and the beauty of its natural surroundings were the perfect conditions to aid recovery.  In 1903, the first public sanatorium in New Zealand – Te Waikato – officially opened its doors eight kilometres from the town of Cambridge.

Much was done by local residents to support the sanatorium and its patients.  Fund-raising events were well attended in the town, and concerts for patients at the sanatorium were regularly arranged.  A billiard table was provided by the Patriotic Society, the YMCA provided a gramophone and new organ for use by patients, and many other gestures of goodwill were generously provided by various local organisations.

Costs for Te Waikato, however, were unacceptably high.  Dr Bernstein, a specialist in treating tuberculosis in London, was appointed medical superintendent in 1913.  Under his management, the costs of keeping each patient reduced by over fifty percent, and he wrote that Te Waikato “is now on a thoroughly good economic basis”.

During World War I (1914-1918), Te Waikato treated convalescent soldiers, as well as other patients.  Consequently, prior to the end of the war, Te Waikato came completely under military control.  The number of beds was extended to 100 and it became a strictly male institution by 1918.[1]  While it was mainly used by soldiers, a small number of male civilians also underwent treatment there.

In 1916, trouble arose when a letter to the Minister for Public Health was signed by 26 patients.  In the letter, patients wrote that “food, sanitary arrangements and general conditions are very serious obstacles to the recovery of an invalid.”  Several soldiers left as the result of what they considered unreasonable treatment by medical superintendent Dr Bernstein.  According to the Waikato Independent of 22 June 1916, life had become almost unbearable as games and cards were largely prohibited, and in one instance a soldier was placed in solitary confinement for taking a stroll with a civilian patient.  Dr Bernstein left not long afterwards.

In 1918, after the Pukeora sanatorium was built in Waipukurau, the Defence Department no longer had use for Te Waikato.  Prior to its closure in 1922, Te Waikato returned to treating both male and female patients.

The Waikato Hospital subsequently became the main centre of treatment for tuberculosis in the region.  The hospital received the Russell Ward, four large shelters and the band rotunda from Te Waikato.  The rest of the buildings and assets were auctioned to the general public.  The site remains a reserve.

Dave Homewood of Cambridge compiled a list of soldiers who died while being nursed at the sanatorium and who are buried at Hautapu.  They were Leonard Rawnsley, Ira Holdsworth, Patrick Heath, Percy Kettlewell, Herbert Strother, Albert Chitty, Edwin Ferguson, Samuel Stewart and Tipene Potatau.  In an article for the Waikato Times dated 27 April 2018, Lyn Williams shared her research on each soldier.

This article was written by Cambridge Museum staff for the January 2021 issue of Prime magazine. To learn more, please contact us at the museum.

[1] Horsley, Alexandra Kate From the Cambridge Climate to Chemotherapy: the Changing Treatment of Tuberculosis in the Waikato, 1900-2010.