Lyn Tairi and Te Kaapo Clark wrote a wonderful history of the Karapiro-Maungatautari area for the Electricity Corporation of New Zealand in 1992. We have permission to serialise it century by century in this and future newsletters. 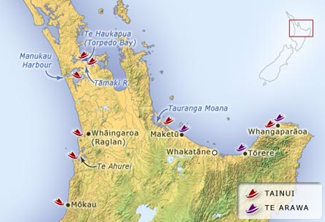 1300 is considered the approximate time of arrival of the third migration from Hawaiki. It is to the waka of this period that Maori today trace their whakapapa and iwi. The Tainui, Te Arawa, Mataatua, Kurahaupo, Tokomaru, Aotea and Takitumu are the seven most famous to arrive at this time.

Tainui and Te Arawa both arrived on the east coast of Aotearoa at Whangaparaoa. After a dispute about who arrived first, Hoturoa took Tainui and his people and sailed up the coast to Waitematā, then hauled the waka across the dividing land to Manukau on the west coast. Some members of the crew settled at Waitematā and their descendants spread south. Hoturoa then sailed down the coast to Whāingaroa (Raglan), Kāwhia and Mōkau.

Meanwhile the members of the Te Arawa crew spread inland quickly from the east coast. Ngatoroirangi, the tohunga of the Te Arawa, discovered, explored and named the mountains of the central plateau. Ihenga discovered and settled the Rotorua lake district, while Tamatakapua the commander of Te Arawa settled the area between Maketu and Rotorua. Their descendants spread inland to the Waikato and King Country.