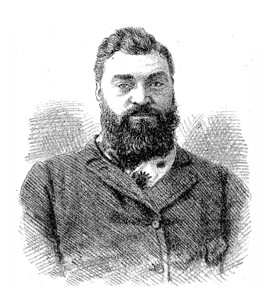 According to an entry in the Cambridge Police Charge Book, Robert Barlow, alias Tanete, was imprisoned at 4pm on 8 February 1871 “for stealing from a ‘whare’ at Maungatautari certain articles of clothing also a Revolver.”

Barlow had served as a soldier with the 3rd Waikato Militia in Cambridge, so I was curious as to why this man, who had been allocated a Crown grant of an acre in town and 50 acres outside the town belt, was compelled to steal from a Maungatautari whare. His story turns out to be surprising.

In around 1847, Robert Stanley Barlow was born in Te Awamutu.  He was baptised by John Morgan in Te Rore, on 9 October 1849, as Robert Stannet[1] Barlow. He was known as Tanete, which may have been the Māori version of his middle name.

When interviewed by the Observer in 1882, Robert said that he grew up in Rangioawhia where his Pākehā father, John Barlow (nicknamed Billy Barlow[2] or “Mr BB” in Annie Shepherd’s diary written at that time) ran a general store.  Before that, his father had been a carpenter in Te Rore.  His mother Makareta was a chieftainess of Ngāti Apakura descent with links to Ngāti Maniapoto.

Robert was described as “immensely powerful”[3] and of “Herculean proportions and strength”[4].

He became a stockrider until, in April 1866, he enrolled with the 3rd Waikato Militia in Cambridge.  In October that same year, he applied for a Crown land grant as the Militia disbanded.  An early map of Cambridge East shows his name on a one acre section on the corner of King and Weld Streets.  He was 19 years old.

Barlow may have immediately sold his land grant.  Much of the land granted to soldiers was swamp and could not be farmed without significant financial investment.  Money had become almost unobtainable in Waikato at that time.  The men of the Waikato regiments were first taken off pay and then their rations were stopped.  Military sections of land could be got “for anything you liked to offer.”  When the Thames goldfields were operating, nearly all the military settlers left Waikato, and there were “no more than 300 or 400 able-bodied men left in the district.”[3]

William Moon arrived in New Zealand from England in 1860.  The Moon name is immortalised in Moon’s Creek, which provided water for Cambridge’s first water supply in 1903.  In 1871, he was working for Edward Bain Walker who was leasing Maungatautari, Pukekura and Puahue blocks from local Māori.  Moon, who was in charge of stocking these blocks with cattle, lived at Maungatautari in a whare or hut, with several other of Mr Walker’s employees in similar whare.  According to Moon’s account, written some fifty years after the event, he went to Cambridge one day and, when he returned, he found that clothing (trousers 2, coats 2, puggeries 3, shirts 1, vest 1) [5] and a Tranter revolver had been stolen from his whare.

Moon made enquiries at the Maungatautari settlement and found that Barlow – or “Tamati” as Moon calls him (there is no indication that Moon ever knew his European name) – was heading off to Te Kuiti the following day.

Moon armed himself with a shotgun, and hid himself behind some fern on the track to Te Kuiti. He soon heard a woman’s voice up ahead say, “There is Moon’s dog.  You will be taken, Tamati.”  Barlow replied, “No Moon or anyone else will take me.”

Moon confronted Barlow, who was mounted with a swag rolled up in front of his saddle.  The woman galloped off, but Barlow unfastened the straps of his swag and handed it over.  He then slipped off the saddle and grabbed hold of Moon’s shotgun.  Moon somehow managed to fling it away, but fought for his life when Barlow pulled out from his coat the Tranter revolver.  In the scuffle, the gun exploded, the bullet passing between Barlow’s arm and side.  Barlow let the gun go, possibly because he thought he had been shot.  Moon grabbed the weapon and ordered him to raise his hands.

Edward Robson and James Turner of the Armed Constabulary were patrolling the area.  They heard the shot, rode up, caught Barlow’s horse, bound Barlow and hoisted him on to its back.  Moon then made his way back to his whare with his prisoner.

Many Māori were already gathered there in support of Barlow.  The men offered Moon horses if he released him; the women cursed Moon for trying to shoot him.  Moon promised not to charge him if the Māori provided him with a guarantee, endorsed by E B Walker, that he would not be troubled over the episode.  The Māori agreed, and Moon took Barlow to a friend’s house in Cambridge West (Leamington) to await the arrival of Mr Walker.  He untied Barlow, they partook of bread, cheese and beer, and got on quite well.

However, the Armed Constabulary arrived en masse at 3pm, arrested Barlow and took him away.  Moon was so incensed that he would not press charges or appear in Court.  Robson and Turner acted as prosecutors.  Barlow was tried and sentenced to nine months hard labour at Mount Eden Gaol.  He was 24 years old.

In 1876, a man named Henare Winiata (pictured right) was accused of murdering his workmate Edwin Packer (pictured left) at a farm in Epsom .  Winiata escaped to the King Country where he farmed in Te Kuiti until he was captured in 1882 by one Robert Barlow.

Barlow was by this time a married father of four living on his own settlement at Mohaonui, near Ōtorohanga, and was a successful cattle dealer.  He was reportedly 6’2” tall, weighed 118kg and was 34 years old. He was liked and trusted by King Country Māori, but was tempted by the £500 reward offered for Winiata’s capture.

Barlow met with Sergeant McGovern and Constable Gillies of Te Awamutu, and together they formed a plan.  Barlow was given money to purchase pigs from Winiata at Te Kuiti on condition that the pigs were to be delivered to him at Mohaonui.  When Winiata and five others arrived, they were plied with drink, and while the others slept, Barlow overpowered Winiata, tied him up and transported him to Constable Gillies at Te Awamutu.

Initially, for his own safety, Barlow was separated from his family in Mangere after the trial.  He was allegedly shot at when he visited Alexandra (Pirongia) to check on his horses in August 1882.  This was after drinking at Connell’s Hotel on the corner of Parry and Crozier Streets with Tu Tāwhiao (Kingi Tāwhiao’s son), Patupatu and others.  Barlow ended up with bullet holes through the edges of his waistcoat but the would-be assassin had run off and was never found.

Barlow eventually joined his family in a seven-roomed house in Mangere village near the bridge.  It sat on three acres of rich volcanic soil, and had a first-class stable, fowlhouse, piggery and spring of water.

Barlow contended that although he had claimed the £500 reward, he had lost far more financially, including his home at Mohaonui, stocked with horses, cattle and 200 pigs. [7]  He had been a well-to-do cattle dealer but no longer had a means of livelihood.

By 1886, Barlow’s home was listed as a polling place for the Western Māori District elections.  He held a large birthday party at his home in Mangere in 1889 “when the guests of the two races fraternised in a gratifying manner.”[8]  This suggests that he was no longer concerned about retaliation from Winiata’s supporters.

In 1888, Barlow was in the headlines again for helping to arrest Charles King who had mental health issues, and was causing mayhem at Manukau Heads to the consternation of local Māori.  “Barlow kindly helped the constable with his charge to the top of the Titirangi Ranges.”[9]

By 1892, he was in the Kaipara, and won a legal case against local iwi over rights to the land he was occupying at Kakanui on assignment from the Pākehā owner.

In 1894 Barlow’s house in Mangere was sold by order of the mortgagee.  He lived out his remaining years with his family at Kakanui “as an industrious farmer” [10] and died 23 April 1896, aged around 50.

Details for this article have been gathered from Cambridge Museum files, National Archives, William Moon’s manuscript of 1926, Pirongia Museum research and articles from Papers Past.

The assumption that the 3rd Militia soldier, the prisoner and the bounty hunter are the same Robert Barlow is due to his approximate age, physical description and areas of residence.  We would welcome any feedback that suggests otherwise.

[1] May have been a mis-spelling of Stanley, although the alias Tanete suggests not.

[2] Billy Barlow is a fictional comic figure who features in several songs originating in the early 19th century.

[5] Police Charge Book entry.  A puggery is a cloth band or scarf for wrapping around the crown of a hat.

Image of Robert Barlow from the Observer 8 July 1882.

Image of Edwin Packer and Henare Winiata from the Auckland Weekly News 1 July 1882.

Researched and written by K Payne for the Cambridge Historical Society Newsletter published in December 2021.