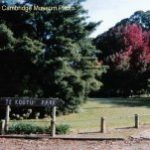 We recommend you view these Google maps in satellite or map mode to access information on the buildings or sites, and street view gives their location.

We hope you enjoy this walk. Click here for a printable brochure to take with you.