This letter was written in Liverpool on 18 February 1918.  The grammar and spelling are authentic, but I have added paragraphs for easier reading.  An article on Daniel Murphy  and Bill (William) Morse follows this transcription.

No doubt you will wonder who on earth this letter is from.  You will wonder more when I tell you that it is old Murph who is writing to you.  Old Murph who was once known in the old established Firm of Cambridge “Ballard and Murphy” who used to deal in soft stuff such as beer, whiskey & soda & other soft drinks.  Well Bill, is Tom Ballard still with you or has he gone to the war, or got married or gone & done some other foolish thing?  Well I trust he has done neither & hope he can keep away from this stunt, it’s no fun.

Well at present I’m a soldier doing a bit in this great war, not married yet, drink all the booze I can lay my hands on (which isn’t much).  I have been wounded once, in the battle of Messines.  I got wounded, a junk of hardware hit me in the head.  I got patched up & was sent back to the firing line & the first time I was in action after I returned I went mad, seen red or something, & was awarded the D.C.M. for distinguished bravery in the field.

It happened in this way.  We had to take a village.  We took it alright, it was an advance of half a mile on a half a mile front.  Well you know when we capture a position off Jerry, he usually makes a counter attack to regain the lost position.  Well on this occasion he did give it a go.  Our orders were the position when captured must be held at all costs, that meant we had to fight to last man.  Well we lost pretty heavily taking this village.  When we got our objective we had been thinned out a few. However I was on the Lewis machine gun then, old Jerry is coming over to try & drive us out, of course as he approaches we simply mow him down but he is in large numbers, some of them must get across, & there’s only four of us left on our post, all the rest are either dead or have been wounded.

Well before I know what’s happening a Fritz has hold of me by the arm dragging me away from the gun.  With my free hand I grips him by the throat then I use my knee & boot, down he goes me on top.  I kicked him till he was unable to breathe anyway comfortable, then I grabs a rifle laying handy, sees another coming at me, so I put a pencil hole fair between his eyes, the point of my bayonet found the throat of two more.  Then I had a sort of feeling that I was alone, so I looks round for my cobbers but there was only one with any life in him at all, so I did the best I could for him.  Then for six hours I stood behind that gun with only it & my eyesight between me & old Fritz & my unconscious mate groaning at my feet, the nearest post on either side on our front been a hundred & fifty yards away, but I stood to the gun for six hours on my own, our support line was a quarter of a mile back.  At the end of six hours I was relieved by a fresh gun team. I helped to carry my unconscious mate back to an aid post but he died, so for sticking to my post & beating the enemy off against great odds I won my medal.

I am now in Hospital you see.  I received my leave to England from France, & during my leave I became very ill, so two days before my leave was up I reported sick to the military authorities who at once ordered me to hospital, the same day I was admitted to hospital at Liverpool where I still remain, & hope to remain for some considerable time.

It is hell in France, & a worse hell than that hell in the other world.  Modern warfare is a thing that no one can explain, & no one can have the least idea of what it’s like unless they go through it.  I’ve seen men, strong men at that, crying & laughing at the same time.  They have become hysterical in that hell.  I’ve seen some of my best mates, mates who would share their scanty piece of daily bread with you, well I’ve seen them blown to plenty little pieces, oh it would make one weep.

The man who says he likes war well I do not hesitate to call him a liar, he has either been taken ill & invalided home before he has reached the firing line, or else he, on his way up to the firing line has been wounded sufficiently bad enough to be invalided home.  They of course are the men who can tell you all about the war on their return to N.Z.  It is unnatural for any man to stand up against the stuff that is thrown at you. Of course we do stand up against it & come out victorious also, but that is different to liking it.

I have never yet been in action where any New Zealander has not gone forward.  You can rely on them to a man, that is why we are marked in that military book as a first class fighting division.  It also explains why we are put into such heavy fighting.

Well dear Bill if Tom is still with you please tell him to write.  Also yourself.  I would be very pleased to hear from you.  Kindly remember me to Mrs Morse & the children.  Of course they would not know me.  Kindly remember me to your people, also to Mrs Morse’s people, & Billy James if he is still in Cambridge & Tom Ballard.  My address is 29449 Cpl D. Murphy, West Coast Coy. First W.I.B, N.Z.E.F France.

I would very much like to hear from you & Tom.  With kind regards & best wishes I remain

Letter: Accession No. 3544/2 in the Cambridge Museum’s collection.

Citation: (LA BASSE VILLE 31 Jul 1917)“For conspicuous gallantry and devotion to duty when one of a garrison of a forward post.  On three occasions he passed through very heavy shell-fire to bring up stretcher-bearers.  On the last one; though buried by an explosion, he completed his errand, and, failing to obtain bearers, returned to the shelled area and carried out a badly wounded comrade on his back.  During the same period, half the post being destroyed by shell-fire, and all the rations with it, he volunteered to go back and bring up food.  This he successfully did.  Finally, when the post was relieved after a terrible ordeal, in which half of the garrison was killed, he remained behind to look after the wounded until stretcher-bearers could be sent up.  His magnificent devotion and exceptional fearlessness cannot be too highly praised.” 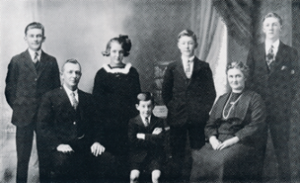 Bill Morse, pictured here with his wife Ivy and five children, was born in Cambridge in 1882 and attended Cambridge Primary School.  In 1896, he served an apprenticeship with his father Robert in the building trade.

In 1903, the Cambridge Water Tower (pictured) was being constructed, and Robert Morse and sons were sub-contractors.  Robert Morse had a horse called Darkie who pulled the bricks to the top of the wall.  It was said that school children regularly visited the building site, slowing the work by feeding apples to Darkie, which was frustrating for Robert Morse.  Darkie was worked by William Tucker, through whom Bill met his future wife Ivy Tucker, William’s daughter.  They were married at St Andrews Church in 1905.  Bill and Ivy had five children.

At the time of Mr Murphy’s letter, Bill was working as a builder in a partnership with W H James (referred to as Billy James in the letter) under “Morse and James” builders.

After the dissolution of the partnership later in 1918, Bill Morse was for 25 years foreman builder for Speight Pearce Nicoll Davys Ltd, a well-known building firm in Cambridge.  He was foreman of such important jobs as the Cambridge Clock Tower, Central Hotel, FAC, Calvert’s Chambers, the Catholic Church and numerous dairy factories and district halls.  One of his earlier jobs was shifting the Leamington Pavilion and Rotunda from the old domain to the present site.

Bill Morse was a keen athlete and active in community affairs.  He was described in his obituary as “the possessor of a happy character and he was respected as a man whose integrity was of the highest.”

Thomas Ballard and Billy James (mentioned in the letter)

We know little about Tom Ballard other than that he was a carpenter.  He appears in an article in the Waikato Times on 5 July 1917 as a reservist by ballot.  He had completed his service and had undertook to rejoin, if required, in an emergency that did not require general mobilisation.  His address was c/o Bill Morse.

Billy James formed a building partnership with Bill Morse, known as Morse and James builders.  It was amicably dissolved in 1918.

Written by Karen Payne for publication in the Cambridge Historical Society Newsletter April 2021.