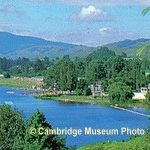 ‘It was in 1904 that the Gorton Estate of 8,000 acres was taken over by a syndicate and cut up for settlement. Among the first settlers were George Death, H Nicholls, J W Fisher, Percy Cutfield, E Greyburn, John Bradshaw, George Harris, W F Simpson, J McNaughton, John Gillies, A A Potts, Absolum, and G F Norris.’

‘In 1897 all the big estates surrounding the [Cambridge] settlement were taken over by the Government and thrown open for selection. This was the turning point towards real progress and prosperity for the Taotaoroa, Whitehall an Karapiro districts. Mr W C Morgan was the first settler in Karapiro. Other early settlers were Joseph Wallis, Giles Keeley, Geo Price, Woolley, P Connell, William Hickey, John Harris and William Graham.’

‘Today [1936] the Taotaoroa, Whitehall and Karapiro are well-settled and cultivated districts, each turning in a solid share of the district’s primary production.’