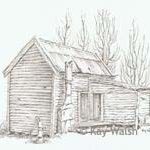 Except for 2,000 acres of run-down pasture on the top terrace, known as ‘the old race course’, the block was mainly in bush, scrub and fern. Access was by way of the Sanatorium Hill and along a clay road for four miles. Later a road via Fencourt and Flume Road was formed.

The settlement was advertised as ‘first class land adjoining Te Waikato Sanatorium and Fencourt and Whitehall settlements’. A portion was said to be suitable for dairying, the balance being grazing land suitable for sheep and cattle. The settlement was well watered by streams and springs and there was a creamery about three miles distant in the Fencourt settlement. The nearest post office was Cambridge, but there was a mail delivery five days a week at the sanatorium by a coach belonging to that establishment.

The first ballot was 27 February 1918.  By 1920, nine settlers had forfeited their land and more soldiers tried their luck.  By 1925, another sixteen had forfeited.  The names of all these early settlers are listed below.

For more information on each of these settlers, click here: Te Miro Ballots 1 and 2

Many factors were responsible for the initial failure of the settlement and the abandonment by many soldier settlers of their farms. The main reasons were the lack of financial assistance by the government and the depression of 1921 when butter was 8d a pound and wool dropped to 6d a pound. They had to pay £80 per ton for wire while cartage cost for timber exceeded that of the material. In July 1921 the settlers again asked for a remission in rent.

Another setback was a plague of rabbits and, with deer and pigs, crops just disappeared overnight. It was not until the Maungakawa Rabbit Board was formed in 1920 that it was possible to farm more economically. Mr Bamforth, in a talk to the Cambridge Historical Society in 1958, recalled that he ‘lived in a tent for three months before building a two-roomed shack’.

A number of the soldier farmers were determined to battle on and made remarkable progress in spite of predictions that the settlement was doomed to failure.

Please click here to contact us.  We would be grateful for any information you may have on the Te Miro Soldier Settlement.