The following is an abridged transcript of a talk given to the Cambridge Historical Society by Neville Souter, aged 70, in September 1969. His grandfather, Captain William Burns Souter founded the firm of W Souter & Co in the early 1860s passing the business on to his sons Edwin (Neville’s father) and Joseph in 1888. The first part of Mr Souter’s speech was published in our March 2022 newsletter.

Neville Souter, pictured in the Waikato Independent in 1969

Neville Souter attended the Cambridge District High School and took over the business shortly after his father’s death in 1924. Already the firm had transferred from seed, grain, farm implements and real estate to the motor business. Mr Souter died in 1976 aged 77.

“One of the biggest bugbears of early motoring was the condition of the roads. Even in our town old residents will remember that every winter there was a foot of mud in Duke Street. To allow foot traffic to cross the road there was a set of duck boards laid where the present pedestrian crossing is situated, and a further set opposite the Dalgety Loan Co.

However, these conditions were finally overcome through the enterprise of Mr Fred Bunyard, the Borough Engineer. He persuaded the Council to let him treat the road with tar and sand. The tar, being a product of the local gasworks, was in plentiful supply. This procedure was repeated each year. When years afterwards the road was torn up for permanent surfacing, the skin of tar and sand was two inches thick. This method of sealing was extended with success to other streets in the Borough and finally to the entire Cambridge-Hamilton Road. For a long time this was the only dust free section between here and Auckland.

Talking of civic affairs, in the early part of the century the Borough Council offices were located on an area now occupied by the swimming baths [now Robert Harris café] with the Borough Depot alongside on property now owned by Cambridge Transport Ltd [now The Warehouse]. A little further south was the Convent School. On the opposite side of the road, in the Commerce Street area, was the Cambridge Saleyards with further saleyards operated by Hunter & Nolan on a site where now stands the Town Hall.

But to get on with the bad roads story. During the winters Cambridge was well isolated by impassable roads. Tauranga, Morrinsville, Rotorua, Te Kuiti and sometimes even Tirau could not be reached during the winter months when the rainfall was abnormal, while the road to Auckland was impassable nearly every winter due to the condition of the clay hills at Rangiriri.
In addition the early motorist was up against it when abnormal rainfall resulted in sections of the roads being underwater. One notorious area was behind the Mercer Railway Station where the road was regularly flooded. Private enterprise being what it is, a man and a horse were usually on duty, the price of a tow through being 10/- if you hooked on before entering the deep section but if you made the attempt and got stuck halfway the price went up to 20/-. I always had a go and always paid the full price. To cope with these conditions, my father carried a wire strainer in the tool box – also a spade, axe, wire cutters and a collapsible canvas bucket as in heavy slogging, radiators required frequent topping up. When a road was really bad the local authority sometimes endeavoured to make it passable by laying fascines crosswise over the extra bad patches.

Round about 1914, various accessories began to come on the market. These included speedometers, and tailor-made chain sets to fit snugly over the tyres. Hitherto we had to improvise with ropes or short lengths of chain threaded through the spokes. There were various kinds of warning signals as a supplement to the bulb horn. Among these were whistles, bells, klaxons, exhaust whistles and even mouth operated sirens. Most cars, except the Model T, were fitted with exhaust cut-outs operated by a pedal in the floor. The use of this was a sure way of letting traffic know of your desire to pass but somewhat tough on fractious horses. Rear vision mirrors also began to appear, but windscreen wipers only came on the scene about 1925, the first being hand operated.

There were always plenty of quack methods of increasing miles per gallon. One of the best known were Gastine tablets which smelled something like mothballs and were put into the fuel tank. They had no beneficial effect whatever but commanded a ready sale.

Most radiators leaked and a quick answer was Radiator Cement of which there were many brands on the market. A puncture sealing compound called Korker was introduced into the tube through the valve. It looked something like porridge and was quite efficient while it remained moist but quite useless when it dried out. Graphite as an additive was and is still used, but it was fatal to the Model T Ford as it short-circuited the flywheel magneto which runs in the engine oil.

During the 1914-18 War, no cars were manufactured in England or on the Continent – all imports coming from the US or Canada. One of the outstanding models of this era was the Dodge, which was first introduced in 1914.

Several of the car makers were experimenting with self-starters. The first I ever saw was fitted to an Italian Scat (1912) and was operated by compressed air. It wasn’t very successful but it had this advantage: the compressed air tank could be used to pump up the tyres. It was followed by an acetylene gas starter fitted to an Abbott-Detroit, and then a 24 volt electric on a Cadillac.

But the Dodge had the first really reliable one. It was coupled to the engine by a silent chain and was a single unit system which worked both as a motor and generator. Dodge also had the benzine tank at the rear but as this was before the days of vacuum tanks or electric/mechanical pumps the fuel was raised to the carburettor by a handpump mounted on the dash. Like the Model T, Dodge did not produce a new model each year as was the custom in those days, and the car remained substantially the same until 1926 when it was hopelessly out of date. To my mind it was a great pity as in the early stages of its history, Dodge was years ahead of its competitors.

Up Cambridge Hill
In the early days of motor cars, the degree of merit was judged by its ability to negotiate steep hills in high gear and the main testing ground here was Cambridge Hill, a name unfortunately forgotten as it is now known to most as Duke Street Hill. Cambridge Hill in the early part of the century was much steeper and the bends much sharper than they are today. The first car to make it to the top was a Model T owned by Mr George Watt and the hill became widely known as a testing ground of motor ability. So much so, that in the programme for the Cambridge Peace Day Celebrations in 1919, the organisers included a motor car and motor cycle speed test up Cambridge Hill, and a further motorcycle climb up Salthurst Hill, which in those days was a track with a grade of about 1 in 2. Modesty prevents me from telling you who won all three events. 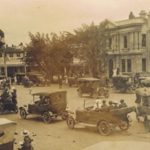 If I might digress for a moment I think it is a great pity that old place names are gradually disappearing. For instance, the stretch of road eight miles out towards Tirau was Ferguson’s Gully. In the old days it was a gully but now the deviated road runs round the top. The hill past the Golf Links, now sometimes called Ireland’s Hill or Golflinks Hill, was the Gorge. If anyone interested takes the trouble to walk up the old road, the reason for this name will be instantly apparent. The hill from Ferguson’s Bridge up towards Shakespeare Street was Chitty’s Hill. The one down to the Abattoirs was Chubb’s Hill, while that adjacent to the new Meat Works was Bell’s Hill. Walker’s Gully between Pukerimu and Kaipaki was, for a time in recent years called Fisher’s Hill but now, happily, it has reverted to its original name. The little dip half way to Hamilton was and is still known to some as Day’s Gully. Leslie’s Gully is the one at the end of the Tamahere Straight – the hill this end being Poplar Hill, the one at the other end which has just been widened and reformed, Steele Hill. It is good to know that many of the old names still remain. These include Mystery Creek, Bridgewater Hill, French Pass, Sanitorium Hill, etc.

During the First World War years and for some time afterwards the pattern of motoring remained substantially the same. Fords sold in ever increasing numbers possibly because, at the price, they looked like being the best value. But Dodges, Buicks, Maxwells and Dorts all had their own following. Tyres were continually on the improve. The standard tyre was known as “fabric” and the more expensive premier quality “cord”. Somewhere about 2000 miles was their early life, but as time went on and the quality improved this figure was gradually increased. Many of the makers were now fitting demountable rims but only supplied four tyres, the fifth tyre being charged as an extra. Tyres up to about 1920 were all “beaded edge” or “clincher” and were stretched over the rim like a bicycle tyre – some were held on by security bolts, but after 1920 “straight side” tyres began to come on the market. They were most satisfactory and have remained to the present day although the method of fitting is somewhat different. Tyres up to and for several years after this period were of the high pressure type, and pressures were anything from 60 to 80lbs on wheels up to 27” in diameter. About 1925, balloon or low pressure tyres were introduced and since then pressures and wheel diameters have been gradually reduced until, today, we find the average pressure is 24/28lbs and the wheel diameter is 12/14”. Today it is nothing unusual to find a set of tyres lasting 25,000 miles with the cases still in good enough condition to be retreaded.

The carriage of luggage was always a problem and old time luggage grids were limited in their capacity. In an endeavour to overcome this difficulty a popular innovation of the day was a large canvas bag which rested on the running board on the driver’s side and was held on by a heavy strap round the windscreen post in front and a similar fitting round the hood anchorage at the rear. These bags held an enormous amount of luggage and odds and ends but had the disadvantage of putting the offside of the car out of action. It was no uncommon sight to see a car on tour with portmanteaux and sundry bags of luggage strapped on at every conceivable vantage point round the outside of the car. Luggage boots as we know them today did not start to make their appearance until 1935.