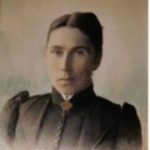 Pioneering for women (in the colonial sense) has only recently been addressed – possibly from the insurgence of family history research.

Our Cambridge women were doing their bit to colonise their new home and as they worked in partnership with their menfolk, equality was being instilled.

Had men of New Zealand not been of the belief that women had the right to vote, New Zealand women would also have had to fight like their British sisters. European women (and men) did not have the experience of working hard together in settling a new land and they had a well-publicised struggle – first to convince their people, then to change the law.

Cambridge was founded in 1864. The campaign for women’s rights began in 1869 when Mary Muller of Nelson published an appeal for women’s rights including the right to vote. In 1893 (24 years later) there were 225 Cambridge women registered on the electoral roll. The Waikato Times reports in 1893: –

“The Cambridge ladies took a big hand in the elections; nearly all that were on the roll exercising the newly acquired privilege”.

A new generation of New Zealanders had won the beginning of a campaign for women’s equality. In Cambridge it wasn’t until 1947 that the first woman, Mrs Eos Enid Taylor, was elected to the Borough Council. Only in recent years have we had women ministers in the Church and in 1993 we had our first woman funeral director.

Women are still pioneering – going where no woman has gone before.

During the last century women did anything – even with the hindrance of long dresses and voluminous petticoats.

Many early Cambridge women were farmers, who also kept the family fed, dressed, clean and educated. Some husbands would work away from home earning cash to enable improvements, more stock or a new plough.

Sometimes the menfolk lived away from home, returning only at the weekends. Women endured the isolation, primitive conditions and physical work along with their men.

With dust in the summer, mud in the winter and ‘burn offs’ all around the countryside, washing must have been a major chore hard to imagine in our push-button world. A scrubbing board has now become a wonder at the Museum and as for the ironing …!

Riding side-saddle was another hindrance but women went to the Hunt Meets with full confidence of keeping up with the hounds and society. (Later a split skirt was common for ladies who did not ride side-saddle.)

Young girls were taught to fire a gun, ride a horse, milk the cows, chop the wood etc and did all these chores while cocooned from neck to ankle.

The safety pin was one of women’s greatest liberators.
Elastic was another.

On 5 January 1888 the Cambridge Ladies Cricket Team challenged the Hamilton ladies cricket team, according to a notice in the Waikato Times. At least 22 women in the Waikato physically enjoyed the ‘sound of leather against willow’.

A presentation cricket bat at the Museum dated 20 November 1915 is inscribed to Elsie Vickerman, for first century scored.

Our pioneer women kept up with their times the same as our women today are still pioneering in our time.