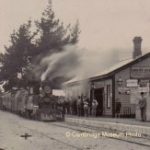 Clear the rails if yer value yer carcase!
We can’t stop to wipe up the mess.
Just look at the smoke from the funnel,
The fireman is stokin’, I guess.

Past the signals we fly like a snail,
The station is lost in our smoke,
And down Cambridge line we proceed with a roar,
Passing a bike with a bloke!

Paddocks and pastures we ‘ave but a glimpse,
Houses are just like a blur;
At last Newstead is reached, and our train
Just whimpers in like a whipped cur.

Stops at the station and picks up the bloke
Who had passed with the pushbike before;
By doubling ‘is speed, ‘e ‘ad passed us again;
‘Ad been waiting five minutes or more!

Again we are travellin’ terrific,
With the clackity-clack of the wheels,
I tell you it’s mighty good pastime to watch
All the animals take to their ‘eels!

Another ten minutes of speedin’,
We rush into Matangi in style;
She won’t be amovin’ for fifteen or so,
So we sit still and just wear a smile.

P’raps one will ‘op orf and take lessons
From the engine in ‘ow to make smoke;
Or else someone else pays a call on the pub,
But not to purchase some coke!

Time’s up! Make a rush for your carriage,
An’ board in the best way yer can.
With a rattle and bang we’re again on our way,
Racin’ in front of the van!

We look through the winders expectin’
Some beautiful scenes for our gaze;
But the train goes so fast there is nothing distinct!
This speedin’ is getting a craze!

Bruntwood we reach in a duststorm;
There’s no doubt we can raise it, too.
We stop ‘ere, pick up some luggage, and then
She is off like ‘a bolt from the blue!’

Houses and cowsheds are shaken
By the rumble and roar of the train.
People rush out in a frenzy,
And say, “It’s that damn train again!”

We can’t stop ter beg pardon.
‘Time and tide wait for no man,’
But into Hautapu
We steam like a scalded can!

We another few minutes are patient,
While the engine plays ping-pong with trucks,
An’ the fireman with sweat on ‘is forehead
Digs in ‘is shovel and chucks

Some black nuggets into the furnace,
An’ orf we are goin’ again.
An’ ah! What is that over yonder?
‘Tis a lab’rer cleanin’ the drain!

An’ now, far behind we have left ‘im,
‘Ave passed by the ‘cemetery bend!’
An’ now we approach by the saleyards;
I’ll soon be at my journey’s end.

We pass the saleyards like lightnin’!
It’s a wonder that we didn’t stop.
Round the bend on two wheels we go skiddin’!
It’s a good job there wasn’t a cop

Hangin’ round, or else ‘e woulda nabbed us
For furious drivin’ round corners.
But one of these days she’ll turn turtle;
As it was we were nearly all ‘gorners!

At last Cambridge station is sighted,
Where travellin’ like ‘ell, it’s a rumour!
The engine slows down and now comes to a stop;
I stagger off quite in a stupor!

Thank Gawd I have landed quite safely,
Gawd help those who daily this journey must do.
These speed demons really are dreadful,
Especially that Cambridge train crew!