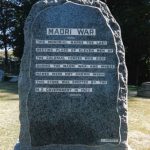 The following is inscribed on a Monument at the Leamington Cemetery.

This memorial marks the last
resting place of eleven men of
the Colonial Forces who died
during the Maori War, and whose
names were not known when
this stone was erected by the
N Z Government in 1927.

Reading the monument one could conjure up visions of heated battles and unknown graves, as eleven men of the Colonial Forces met their fate.

In 1926, when the Department of Internal Affairs referred to these men buried in the Leamington Cemetery, their names were unknown. Miss Edith Stathem (Inspector of War Graves) supported the idea of erecting a monument and recognising the graves if these men had seen service in ‘the Maori war’.

However, when Cambridge was settled in July 1864 the fighting was over and research has uncovered the following recorded deaths among the Cambridge Colonial Forces.

• Our first death was Jonathan Dann 25 September 1864 and according to the death register he died of ‘apoplexy’. His inquest says he was very drunk and ordered to his tent. The verdict was apoplexy fit brought on by excessive drinking of ardent spirits.

• 23 November 1864 Frederick Higgins who was partially if not quite intoxicated would bathe in the river although told not to do so, and drowned. He was a member of the Forest Rangers and at dusk his comrades discharged their farewell shot over his grave.

• David Halliday’s body was found floating in the river having gone missing 12 December 1864.

• The correspondent for the newspaper the Daily Southern Cross records, “I much regret to say that a man was found hanging from a tree, about a week ago, by a party of surveyors. There is little doubt that his name was Buckley”.

• Michael Murphy was found moaning in a ditch and he later died in the hospital due to severe injuries to his spine “the case of which there is no evidence to prove”, says the inquest.

• George Wilson shot himself at 2pm 13 May 1866 and left a note for his mate:- “Dear Moffatt. – You will be no doubt surprised at the end I have come to. Mental distraction has driven me to this. I find I cannot get over it; so good-bye. Communicate this to my brother, J H Wilson, Grove Street, Castlemaine, Victoria. George Wilson”.

These deaths are not as illustrious as the memorial stone suggests but the research has made a little clearer the conditions of Cambridge at that time.

Robert Wilson was the next Cambridge death – 23 June 1866. He was drunk and choked on a piece of steak. Robert was the first to be buried on the right bank – in the Cambridge cemetery at Hautapu.