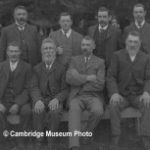 A Lively Time at Leamington

At the meeting of the Leamington Town Board on 5 February 1910, the clerk read the guarantee that had been given to the Board by Messrs F Mack, J T Jarrett and C Jarrett in the connection with keeping in order of a drain from Shakespeare Street to Bell’s Gully. The Waipa County Council had agreed to contribute £11 towards the construction of the drain, when a guarantee was received from the Board that it would be kept in order. The matter has been before the Board on several occasions.

Before the motion to accept Messrs Mack and Jarretts’ guarantee was put to the meeting, Mr J Keeley rose and characterised the drainage scheme in question as one of the greatest scandals of the day. He proceeded to review the whole history of the matter, from many years back. During the course of his remarks, he used the term ‘corruption’ and inferred that the ratepayers’ money had been used to benefit private people’s property. However he said, the whole matter was going to be threshed out in Court. His wife was suffering damage to her property in consequence of the drain, and she had consulted a solicitor.

The chairman asked if any other member had anything to say. He explained the purpose of the guarantee, and said the Board was not preventing other water coming down the drain.

The latter then asked if the Board knew how the scheme originally started, and in course of his remarks he referred to the connection of a certain member of the Board with the matter, and the purchase of some sections by him in the vicinity of the drain. Mr Keeley also contended that the work of constructing the drain should have been tendered for, as it would have cost much less money.

The chairman said there was no use continuing the discussion, and he moved that the guarantee of Messrs Mack and Jarrett be accepted.  This was seconded by Mr Hill.

Mr Keeley proposed an amendment that the guarantee be not accepted, but there was no seconder to this.  The motion was then put and carried, Mr Keeley dissenting.

At a later stage of the meeting, the chairman Mr White, said that as a rule he did not pay much heed to correspondence appearing in the press, but he had noticed that Mr Keeley had written to the ‘Independent’ and alleged that after the last meeting of the Board had concluded, and he had left the room, other business was dealt with in his absence. That statement was quite untrue.

Mr Keeley:   Look here, Mr Chairman, that guarantee was brought forward after I left. If I had not written to the paper the whole thing would have been passed.
The Chairman:   I beg your pardon. Don’t you cast insinuations upon the Board, Mr Keeley. Why didn’t you come inside like a man, instead of eavesdropping?
Mr Keeley:   I wasn’t eavesdropping.
The Chairman:   You must have been.
The clerk explained that the signing of the guarantee in the room by those members interested was purely an office matter.
Mr Keeley:   And that’s business.
At this juncture, two or three members endeavoured to speak at once.
The Chairman:   Order gentlemen! One at a time please.
Mr Keeley said he had specially waited all the evening at the previous meeting of the Board for the guarantee question to be brought forward.
Mr Kingdon:   It appears to me, Mr Keeley only comes here to kick up a row.
Mr J T Jarrett:   Yes, he always comes to kick up a row.
Mr Keeley:   I like to see things straight and honorable. I know the men I have to deal with!
A member:   I don’t think you do, Mr Keeley.

The clerk then proceeded to read the minutes relating to the matter.  Mr Keeley said the Board’s action was not legal, and they would find it out by and by.

Mr C Jarrett said the whole transaction was a straight affair. He and his brother had worked a whole week for nothing in constructing the drain. The work could not possibly have been carried out for less money than it did. The speaker said that it was him that Mr Keeley had been hinting at in his remarks, and turning to that gentleman he said:   Do people have to come and ask you and your wife what they shall do?
Mr Keeley:   No, but I have to protect the ratepayers’ money.
The Chairman:   Order please.

Some further angry passages followed, Mr Jarrett declaring that one of Mr Keeley’s statements was a lie.
Mr J T Jarrett:   It’s a lie, Jim Keeley.
The Chairman:   I say, order, order! That’s not parliamentary language. Order, order!
A voice:   Put him out!
Mr Keeley:   No man here could put me out!
An argument then ensued between the clerk and Mr Keeley.  The latter made reference to some bygone incident, to which a member replied that Mr Keeley had a narrow escape of losing his head then.
The Chairman:   That will do gentlemen.
Mr Keeley:   Why didn’t you call for tenders?
He then made some allusion to a gravel pit.
Whereupon Mr C Jarrett interjected:   Pity we didn’t have you down in it. You wouldn’t be here tonight.

Mr C Jarrett then proposed and Mr Kingdon seconded that the Board’s guarantee for the upkeep of the drain be forwarded to the Waipa County Council. The motion was carried, Mr Keeley voting against it, remarking that ratepayers’ money was being used to benefit other people’s property.

The meeting then proceeded more calmly, but after the chairman had declared it closed, about 9 pm Mr Keeley asked that the press should be supplied with a copy of the guarantee.

This resulted in further recriminations, and a very stormy scene followed between Messrs Keeley and C Jarrett. As the former was about to leave the room, he repeated a remark to the effect that he could not treat Mr Jarrett the same as the latter had once been treated, as there was no tub of water about.  At this, Mr Jarrett rushed at Mr Keeley, near the doorway, and caught him by the scruff of the neck.  A fierce struggle ensued, the combatants clutching at each other’s face and whiskers.

Mr Keeley fell in the doorway, and one of his sons then appeared on the scene and the parties were separated, Mr Keeley Jnr. standing between the men and preventing a renewal of hostilities. Angry words and personalities however, continued till the pugilistic members turned for home. A little party then gathered in the middle of the roadway and discussed the painful incident. The ‘fight’ was witnessed by a number of the members of the Board, some of whom looked on with evident amusement, but others, including the chairman, apparently fearing trouble, left the room.

Thus ended the liveliest meeting held in Leamington for some years.