Ode to the Imitator 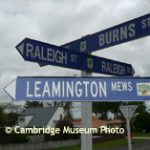 Of Leamington at last we’ve heard
And though the poet is fluent of word,
His verses do not rhyme too well
This tendency goes to break the spell
Of historic names to streets imparted
And though their owners have departed
I’m sure they would be proud to know
Their names on posts and poles we show.
One reads of Wordsworth’s mighty deeds
And with thought and reflection one concedes
On a tablet of wood his name to meet
Merely to mark a dusty street.
What mighty deeds a man must do
His name, from a pole, a street to woo.
Tradition is no more, I fear to say,
Commerce has come to marr the day
This is no sleepy English Town,
The noise of industry is too loud to drown
Why not call these Streets by number
Then mighty names we would not lumber
With doubtful reverence, misplaced fame.
I have not space history to repeat
Nor yet to recall every Leamington Street
I merely hope to gain by this verse
The clearing of many souls from a curse
Cast by the greatest men the world’s known
And from their efforts this township has grown.