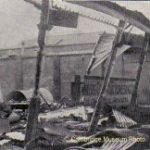 by ‘Unit E’ – 6 July, 1926
(Burning of the Farmer’s Auctioneering Co’s premises and the Central Hotel)

At six o’clock on Thursday night, a copper off the beat,
With thoughts of home, the wife and kids, was on his way to greet,
When all at once his well trained eye a burst of flame espied,
“A foire, a foire, begad, begad! A foire, begad!” he cried.

His cries aroused the men and boys who in the Central drank
The little doc and doris right from the cellar tank.
A bull-dog rush into the street with one accord they made,
And found the Farmers all at once was on the Heavenly grade.

The siren rang with all its might on the chilly evening air.
The mothers dropped the teapots, and the youngsters got a scare.
The fathers, just arrived from toil with thirsts already quenched,
From omelettes, toast and hot pea soup were mercilessly wrenched.

In haste, and ready for the fray, the firemen made a dart,
And cranked the poor old Lizzie up, who never fails a start.
With axe and helmet, hose and zeal they started for the glare.
Thought they, “The goal of fame stands out, we’ll never show despair!”

The copper and the boys, with nappers full of sense,
Leaped through a window at the back while smoke was rolling dense.
They saved the books that tell the tale of everything we got.
It’s hard to bear, but now, I s’pose, we’ll have to pay the lot.

We gathered from the country-side, from street and lane and farm,
We’re always ready to be there when anyone’s in harm.
The water pumps got on a spurt – the old tank’s always full.
The only danger really is the wells won’t stand the pull.

The flames with raging greed roared up into the starry sky;
It made us think, ah! think we did, of ‘the Sweet Bye-and-bye.’
The ammunition cracked away, like maxims at the war.
All hope was gone, the fate was sealed on the Farmers’ Co-op Store.

The firemen scaled the dizzy heights of the Pub we love so well,
And fought like trojans in a trap right at the mouth of hell.
The water came out slowly, caused through punctures in the mains,
But they saved the dear old ‘Boozer’ from the roaring, raging flames.

We carted out the chattels, and scattered them about;
We rushed to save the whiskey, the beer and the stout.
Many willing hands there were, including every rank,
So we gently carried it across and placed it in the bank.

A thing I must not here forget was one heroic deed.
A worthy notable has proved he’s equal to the need.
They said the ‘Wells’ were running dry, a thing that’s not believed,
For there he was upon the roof, and with pail he water heaved.

We waited long out in the cold on that eventful night,
With pride and admiration for the way they won the fight.
But we never shouted ‘Hip-ray’ or gave the boys a cheer,
Altho’ it’s whispered round the town that someone turned on beer.

Yes! the tennis ball was going with a pleasant, happy swing,
When a messenger was sent posthaste our gallant boys to bring.
They partook of cakes and trifle and the sparkling claret-cup,
And tipped glasses with the flappers who wished them all ‘good luck’.

I thought this story finished, but lo, alas, alack!
A naughty, tiny little spark had got in some small crack,
There to await its chance again to set the inn alight.
And turn us out from cosy nap late on the week-end night.

Again we heard the howling sound, the siren’s deadly bleat,
Accompanied to the music of many running feet.
Right on the mark the boys were found, their valour to maintain,
And try again with all their might these dreadful wells to drain.

But the water held out nobly, with a hundred pressure strain,
And once again they won the day, and beat the raging flame.
So she’s still a-standing firmly tho’ her head is battered in,
And the firemen are awaiting for still another win.

So gather ye a moral from the happenings of the past,
That you never know what happens the next minute from the last.
Then never shirk a danger, or duty disavow,
Part of the Host have crossed the Bar – the rest are crossing now.