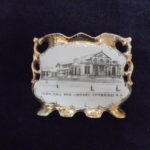 We know that our Museum website is full of treasure. Now is your chance to uncover it! Find some jewels, precious metals and stones from Cambridge history.

Handy hint for tracking these down: Search by keyword in the box at the top right hand corner of the Cambridge Museum homepage.

If you want to search for words together apply phrase searching. Use quotation marks to treat words as a phrase e.g.“Sapphire Smith”