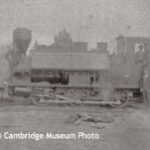 Excerpt from The Waikato Times 9 October 1884

‘The Cambridge railway passes through one of the most forward and prosperous settlements in the North Island. Though the land in the immediate vicinity of the line between the Hamilton and Fen Court Stations is not of that character which favourably impresses the visitor, all who are in any way conversant with the country on either side, with its unbroken line of prosperous farms will be easily convinced that the Cambridge railway will be of the most paying character. Junctioning with the Waikato-Thames railway at Ruakura, the line starts through some of the swamp property of the Waikato Land Association.

‘The Ruakura station is a veritable island, for though the swamp is well drained on either side, it is approached by no road, and with the exception of the railway it has no means of communication with the outside district. A pumping station is being erected here for the accommodation of both lines. The Mongonui [this is the spelling adopted by the railway authorities. It should be ‘Mangaonua’] station is in the centre of a large pastoral district, and should contribute a fair quota to the traffic of the line. The Mongonui bridge is an immense, wooden structure spanning the entire gorge through which the creek runs, and is the only structure of its kind on the line. The land between here and Tamahere is very swampy, but only to the extent of a few acres on either side. It was expected that Tamahere would be accommodated with good station buildings; but the Public Works Department has evidently thought differently, and a station of the orthodox salt-box pattern has been provided. Good cattle yards have, however, been erected for the convenience of the settlers, and we think that before long the Department will find necessary to appoint a stationmaster to look after the accommodation of the public in this quarter.

‘Between Tamahere and Fen Court the line passes through another long strip of drained swamp with a very light sprinkling of bush to the right; but a few chains beyond the land is of first-class quality, and almost every acre is under cultivation. On reaching Fen Court [a mistake has evidently occurred here, as what is called Fen Court by the railway authorities should be called Hautapu, and vice versa], attention is soon attracted to the bright homesteads, the well stocked and subdivided farms of a long settled district. Nearing Hautapu station the prospect becomes still more encouraging. The immense tract of improved land of the Auckland Agricultural Company is on the left, the well designed and picturesque homestead with its large herds of pedigree stock being within view. On the right a series of valuable farms and small homesteads are passed.

‘The site of the Cambridge Dairy Produce and Bacon Factory is here, on Mr Allwill’s property, to which a siding will be laid off at an early date. The line now enters the Victoria-road and proceeds on a straight run through a flourishing piece of country to Cambridge. On arrival at Cambridge the visitor cannot fail to be impressed with the rising importance and growing prosperity of this centre. Indications meet the eye on all sides of the enterprise which, more particularly for the past few years, has characterised the community. St Andrew’s Church, with its lofty spire, and the Baptist Tabernacle at once attract attention, and the domain improvements are already beginning to afford an appearance.

‘The one great fault of the line is here strikingly apparent ï¿½ it never should have been carried so far into the town. The terminus station is a first-class building, and affords every necessary accommodation for the public. The waiting-room accommodation for ladies is of a very superior character, and the comfort of the sex has certainly not been overlooked.
‘Cambridge is the centre of a large and flourishing agricultural district, the resources of which are being gradually developed. The numerous tracts of improved land in the surrounding districts which are now held by various companies will not be long before they are the scenes of prosperous and populous settlements.

‘A number of the settlers joined the train at the various stations along the line. On the arrival of the train at Cambridge, the excursionists were greeted with cheers from a number of people assembled at the entrance to the station-ground. The local school children were assembled on the platform in charge of their teachers and parents, and were treated to an excursion down the line as far as Tamahere, where they were liberally regaled with milk and buns by Mr Jas. Runciman, returning to town about 5 o’clock.

‘The town was gaily decorated with bunting. The most noticeable feature of the decorations was a tastefully-designed arch at the railway crossing in Lake Street bearing the inscription: “Success to the Cambridge Railway.” Lines of bunting extended across Duke Street at the Duke of Cambridge and the Criterion Hotels. The National Hotel was becomingly decorated with bunting and Chinese lanterns, which, when illuminated in the evening, had a very pleasing effect. Messrs Lewis & Simpson’s store was also set off to advantage.

‘The Hamilton excursionists left Cambridge on the return trip at 7 o’clock, after spending a very enjoyable day. During the afternoon a large number of people visited Te Koutu Lake reserve, where a few young people of both sexes indulged in a little boating recreation. A scratch cricket match was held in the Government paddock, which attracted not a few spectators. In the evening a pyrotechnical display took place opposite the National Hotel, and was a decided success. A large number patronised the ball given in the Public Hall, and dancing was kept up with spirit until an early hour this morning.’