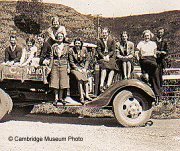 At a meeting in Cambridge to form a branch of the Returned Soldiers’ Association in 1917, there were 4 women on the promotion committee. Women already working for various patriotic groups could be Honorary Members for 2/6d.

When Poppy Day started in Cambridge in 1922 the ladies started a three-day campaign, just prior to Anzac Day, to sell 1,000 poppies. Mrs Florence Gane was elected convener and her committee of Mesdames Ann Cox, Annie McCann, Maud Simpson, Mary Lowther and Miss Jessie Jackson canvassed the town, calling at the bowling and croquet clubs, and around the country areas as well as putting up stalls in the main streets.

They raised £60 and the profit made was used in the district where it was given to help find employment for soldiers.

In November 1940 discussions were held to form a branch of the Women’s Auxiliary Service. And it wasn’t long before confusion arose through various organisations with similar names.  A Soldiers’ Club had been formed in July 1941 through the Patriotic Committee with Mrs E E Taylor and Mrs J W Garland in charge of organising dances for soldiers stationed in Cambridge.

The RSA asked the ladies to change the name of their club.

Then in September 1941 came the Cambridge Branch of the League of Womenfolk of Overseas Forces.

Mrs H E Barrowclough, wife of Major General Barrowclough, DSO and Bar, MC, felt that not only the men but the women of New Zealand should unite to further the interests and protect the rights of all the returning men who had fought to preserve our liberty and our very existence.

Over 80 women joined in Cambridge with Mrs Elfreda Ward president and Mrs Eileen Haworth secretary. Their aims were to unite the woman folk of the members of the Overseas Forces in fellowship, help, advice, welfare, rehabilitation, peace and to preserve the memory of those who had given their lives for their country.

As Mrs Barrowclough went throughout New Zealand forming branches of the League, she found that there were already many committees and subsidiary associations of women doing practically the same work. She thought that if these were all united (within the NZ RSA) they could be a power for greater effort. With this in mind she meet with the RSA at the headquarters in Wellington and her idea was accepted.

By January 1942 the League comprised women with husbands, sons, fiancees, brothers or fathers serving in the armed forces and was known as the RSA Overseas Mothers and Wives Club.  Their main purpose was to assist with the well-being of wives and mothers throughout the Dominion. All women who had helped with RSA work were eligible to join and in March 1942 they were affiliated with the NZ RSA as the RSA Women’s Section.

Later in 1943 the Borough Council wrote to Mrs Mable Wells (RSA), Mrs Enid Taylor (Patriotic) and Mrs Kath Tod (Red Cross) wanting to set up a combined committee of four delegates from each organisation to enquire into and assist the wellbeing of wives and families of men at present serving in any branch of the forces.

The RSA executive received a deputation from the Womens’ Section in March 1944 – Mrs Wells president of the newly formed Womens’ Section of the RSA waited on the meeting in order to ascertain whether their services were required in the future.

There was already a Ladies’ Social Committee attached to the branch, and Mrs Ward (the first president) stated she personally was unaware this was the case when the Women’s Section was originally started. The Ladies intended to carry on independently if the RSA didn’t want them and had no intention of usurping the functions of the present Ladies’ Social Committee. The Women’s Section was concerned with the welfare of the dependants of men of the forces, providing comforts for returned men in hospitals and gifts for the children at Christmas.

The Women’s Section had the support of the 2nd NZEF men, which the RSA also wanted.

It was resolved that -“The Executive was happy to associate itself with the Women’s Section and would endeavour to work in utmost harmony in assisting them to follow the rules of their organisation, particularly concerning their work among servicemen and their dependants. The status quo of the present Ladies’ Social Committee would not be altered.”

The 2nd NZEF formed its own association believing that the problems of men in this war were different from the last and were best understood by the men of this war. The RSA was working also for rehabilitation and housing of returned servicemen and it was not long before they, the 2nd NZEF and the Air Force Association were all amalgamated.

When the 2nd NZEF Association folded the Women’s Section received £52 8/4d from their funds which was used in distributing comforts to ex-servicemen and women in Greenlane and Waikato Hospitals.

Mrs Faulkner, a 1st World War bride, suggested ways of making current war brides feel less lonely. Welcome Homes and entertainment were held at the Lyceum Club as the RSA rooms were being used for service men on Mondays and Fridays (the only days convenient for country members to be in town).

A Christmas tree was organised for the children and a Picnic Race Meeting raised £60 to establish a rehabilitation fund. Cakes and comforts were sent to the Rotorua Military Hospital and a bring-and-buy stall raised money for wool and material to make gifts for POWs and those returning. In 1946 a collection of clothing was made and sent to Europe .

From 1945, on Monday and Fridays, the ladies served luncheons and afternoon teas under the guidance of Mrs E J F Kennedy and made a profit of £347. The Patriotic Society, when it folded, donated their tables, chairs and kitchen equipment. Stain was applied to the tea-room floor and a shelf erected in the servery, but by August 1947 the tea room had closed.

By 1956 the Women’s Section had no home and no amenities. But it helped many people and participated in all RSA functions. They ‘adopted’ the ex servicemen in Ward 9 at Waikato Hospital after ending a long association with the TB Ward at Green Lane where hampers had been sent monthly over 9 years. Many members helped with poppy day collection and they served the refreshments at the RSA rooms. They held an annual street stall, gave coal to war widows and continued to put flowers on the soldiers’ graves. By 1968 there were 115 graves so the wreath was placed only on the cenotaph. It was noted that the Women’s Section “Would rather give flowers to the living”.

Irene Green received her Life Membership award of the Women’s Section in 1967 from Mrs Shirley Foster. As a foundation member she had given valuable service for 26 years, including 3 years as president.

It was noted in 1970 that Life Awards were not given lightly as Irene Green was elected Honorary Life Member of the Cambridge RSA for her services over many years as pianist in front of the town hall on Anzac Day.

In 1969 the Women’s Section entertained the War Widows with their first Christmas luncheon when daughters of the Women’s Section waited on the tables.
In 1971 Mrs Molly Power received Life Membership as she had been a member for 25 years being treasurer for 14 and president for 2 years. She said the work had been a pleasure and didn’t seem like 25 years. A Certificate of Merit was also awarded to M Fletcher, a member for 14 years and on the committee for 12 years. She had been associated with “the boys” since World War One and considered her work a labour of love.

Mrs Benny Arnold was awarded a Certificate of Merit for long and outstanding service in 1977. She had been selling poppies since 1939 and for the last 13 years her specific task was doing the rounds of the hotel bars between 5 and 6 pm. She had seen the change in 1979 when the handmade fabric poppies became uneconomical and plastic ones were introduced. It wasn’t until 1983 at the age of 86 that she gave up the job.

The women carried on helping people with coffee mornings, social afternoons for veterans and their wives and residents from Sunningdale Veterans’ Home in Hamilton. They continued with the annual street stall to raise money for their welfare work.

In 1985 Jenny Wright, Shirley McLeod and Thelma Larnach received life membership certificates and gold badges. In 1986 when Shirley and Howard McLeod left for retirement in Taranaki, Shirley commented, “Although we can laugh and have fun, you join the Women’s Section to work”. She had been with the Women’s Section for 36 years after joining the Wrens from Cambridge in 1942.

1986 was the 45th birthday of the Women’s Section and they continued to knit dozens of hats, gloves and jerseys for the child cancer patients of Ward 52 with wool donated by Thoroughbred and Patons. In 1989 they gave $500 to Hamilton RSA to help maintain Sunningdale Veterans’ Home.

The first Christmas Luncheon was held in 1969 – prior to that the annual celebration was known as the “birthday afternoon tea”.

In 1990 the widows’ and veterans’ Christmas function reverted from a luncheon to an afternoon tea. Rose Griggs the president said, “The RSA Women’s Sections were formed especially to support the widows of those men who would not return from service overseas, and to complement the work of the RSA in caring for those who were disabled through their service. And basically this is what we are still striving to do 50 years later. Today we haven’t the hassle of ration cards, petrol coupons, or having to wait our turn on the telephone party line, indeed everything seems to be laid on for us. But I somehow feel in those days of 1941 our early members had a special kind of faith to sustain them. We can look back and remember them with love and pride”.

The first debutante ball for 33 years was organised in 1990 to celebrate the 75th Anniversary of the Gallipoli landing – and it was a brilliant success. 14 debs were piped into the hall through an archway of flowers, escorted by army, navy and air force personnel. They were presented to Mr Alan Johnston, the Dominion President of the New Zealand RSA.

Joan Bartlett began her association with the RSA in 1946 serving 15 years on committees and working actively and consistently for the benefit of members. She was president of the local branch of the Home Services Association from 1968 to 1977; became vice president of the RSA Women’s Section from 1969 to 1970; and president from 1972 to 1976.

Joan led the Women’s Section in their first parade on Anzac Day 1976: served as the Women’s Section delegate on the RSA executive committee from 1989 to 1990 and served on both the club and house committees. She initiated and organised the Friday counter lunches; assisted in running the Thursday and Saturday raffles; various BBQ’s; and was responsible for the very successful 75th Jubilee Debutante Ball in 1990. Later in 1996 Joan was awarded Honorary Life Membership of the Cambridge RSA.

In 1996 the 50th celebration of the Cambridge Women’s Section of RSA entertained 130 guests. “Our numbers are declining because of old age – we are down to about 50 members now, with all but three over 70 years of age,” said Molly Burns the president. Their work included welfare, keeping a watchful eye on veterans and widows at home and in rest homes, supporting any fundraising, providing refreshments at funerals and co-ordinating Poppy Day. Their operating funds were raised through an annual street stall.

After the sale of the RSA building in 2004, the Women’s Section moved their headquarters to the Red Cross rooms and on 18 March 2005, they held their final meeting.  Their help and concern will be remembered by many people – their motto “People Helping People” having gone full circle.