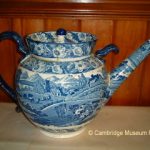 This teapot, seen in a shop window advertising tea, was bought in Yorkshire by John and Margaret Allan. The Allans were from Scotland and left the London docks in May 1863 in the sailing ship ‘Anne Wilson‘.
They arrived in Auckland at the end of September, during the Waikato Land Wars, and sailed up the Waipa River to Pirongia, which was then called Alexandra.