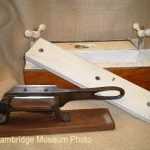 In the late 19th century, there was no tobacco-growing industry in New Zealand. It was all imported and thus subject to customs duty. Many settlers experimented with growing their own and used tobacco presses and cutters like these for plug tobacco.
However, anybody found to be in possession of raw tobacco without having paid customs on it could find themselves in Court, such as early Cambridge settlers Charles O’Neill and Harry Owen.