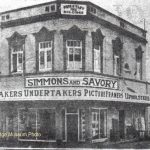 More out of convenience than design, it was common for a carpenter or joiner to double as undertaker, having a wagon and the ability to construct a coffin. In early Cambridge Stephen Lodder, a carpenter of Alpha Street and Richard Wright, a cabinetmaker and upholsterer in Lake Street filled this capacity as did David Richardson who was an architect and builder.

It was usual, when someone died, to call in an experienced person with nursing qualities to lay out the deceased. The undertaker placed the body in a coffin and it was left at the residence until the day of the funeral, possibly with lavender or a similar type of deodorant. He also saw to the legalities of registering the death.

About 1890 George Dickinson incorporated Undertaking in his stationery business. He later specialised, advertising as Funeral Director and Embalmer next to St Andrews church at first, moving to Empire Street in 1904 and later to Alpha Street.

In that era at the beginning of this century, it was obligatory for the funeral director to wear top hat, tails and striped trousers. The horse-drawn hearse was elaborately ornamented and the horses dressed in plumes.

In 1911 Messrs Malin Bros of Leamington, incorporated undertaking in their wheelwright business. Shortly thereafter, they moved to opposite the Water Tower where they were just undertakers.

In 1916 F C Sawyer – Undertaker, was advertising “oak and rimu caskets a specialty” and Hudner Bros of Hamilton were official undertakers to the NZ Defence Department.

Between 1923 and 1934, A L Simmons and A E Savory between them, covered as undertakers, upholsterers, picture framers etc in the Priestley Building. Then in 1925 A E Savory and Co provided a motor hearse, probably a Daimler, and the funeral cortège would have been acknowledged by other traffic coming to a halt, pedestrians standing still and men removing their hats. (Today vehicles in a funeral procession drive with headlights on dip).  In 1934 E G Scrimshaw, ‘Undertakers and Sanitarian’ of Hamilton took over Savory’s funeral business.

Meanwhile George Dickinson had died in 1923 and his son-in-law, the architect James T Douce, carried on the funeral directing and cabinet making business as George Dickinson & Co. Douce drove a Reo hearse which had a car chassis with an overhang of about four feet (1.22 metres) out the back. When he had a funeral in Te Awamutu he borrowed a hearse from Hamilton as the weight of a heavy body caused the overhang to drag over the bumps on the swamp road.

This was until December 1945 when Lloyd Williams, a returned World War Two soldier, took over the established business in Lake Street – formerly the YMCA building. He sold the Reo and bought a Hudson, then after five years bought a Studebaker. In 1951 a chapel was added to the Funeral Parlour. For health reasons Williams sold to Dick Taylor in 1971 who took on the strain of being on call 24 hours every day in the week.

It was sold again to John and Anne Milne in 1976, who soon realised that the business had outgrown the existing premises and relocated to Albert Street in 1981, changing the name to Cambridge Funeral Services.  After 15 years John and Anne retired and sold their business to Gene and Jenny Featherstone who introduced personalised hymn sheets and a Book of Remembrance at funerals. They in turn sold to Ray and Rae Grace.  (Stuart Houchen then bought the business, retiring after 13 years.  At the time of writing (November 2018), it was owned by the Legacy Trust, a funeral business from Tauranga, whose total profits are donated to community groups and charities.)

Trevor Grinter started a funeral service from Hallys Lane in Cambridge in 1992.