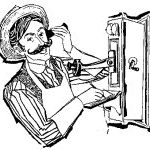 Issues of the Waikato Independent for the period 1904- December 1949 are on Papers Past. You can contact us first to get a brief reference – issue date and page number – for your search.

The first Waikato Independent was published in Cambridge on 15 November 1904. David Pirani was founder/owner/editor and in his first editorial said, “Today we present our readers with the first issue of the Waikato Independent, a journal which, in the course of time, should be the means of materially assisting in the welfare and development of the town and furthering the advancement of the outlying districts.” . . . “It is well known that the power, influence and progress of the press depends almost entirely on the support it gets from the public, and for that reason we urge upon those who have the welfare of the Waikato Independent at heart to bear this in mind.”

Known locally as ‘The Inde’, this newspaper saw about ten owners. It changed its name to the Cambridge Independent in November 1966 and after 91 years of service closed in April 1995.

The Cambridge Museum bought the Masthead, archives and photos. Faithful volunteers are now indexing all names and subjects relevant to Cambridge.

The collection lacks copies for 1910, 1914, 1915 and 1943 issues. If you have any of these hidden away, or documented events during that period that you want to find a home for, we would welcome them to fill these gaps.