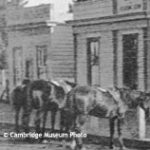 The Cambridge Borough Council came fighting and yelling into the world at their first meeting on 7 September 1886 – twenty two years after Cambridge was founded. (The first local body was the Cambridge North Highway Board in 1871. Then the Cambridge Town Board came into being in 1882.)
A complication arose when there was a delay in the publication of the gazette which meant there was not enough time to give the statutary notice for an election – the town having been declared a borough on 19 August 1886.
The government then allowed the existing Town Board to continue in office until September 1887 but the Mayor could be elected in November 1886. Mr John Houghton had assumed title as mayor and used it on correspondence, and because of this the meeting on 7 September 1886, was not pretty.

First up Councillors Gillet and Asher had received notice the previous day that the meeting had been adjourned and they wanted to know why. The chairman said, “This will be attended to in due course.” An attempt by Houghton and Hewitt to defranchise Asher and render him ineligible to hold office as a councillor, because he had sold his property to Mr J K Souter, aroused fierce protest from Messrs Gillet, Hughes and Asher who attempted to move a motion that Houghton should vacate the chair. Cr Gillet said, “Leave the chair, we’re not going to be bounced by you. You’re a disgrace to the board and the place.”
The opposition then carried a vote that Cr Gillet take the chair, but Houghton contended that Asher’s vote was invalid and he (Houghton) used his casting vote and declared the motion lost. Cr Gillet asked “Why?” Crs Hughes and Asher also protested against the ruling of the chairman.

The chairman said, “Excuse me, but I have the conduct of this meeting.”
Cr Hughes “We are not children, we’ll excuse you if you behave properly. If councillor Asher votes improperly you have got your remedy.”
The chairman again objected.
Cr Gillet “Look here Mr Chairman, if you refuse to go on with the business we will remove you from the chair and from the meeting.”

Amid some excitement the resolution and the amendment were read and the chairman proceeded to put the resolution. Cr Gillet seized the chairman’s papers and Houghton and Hewitt then left the meeting. Cr Asher resigned his seat and at the election for a replacement it was suggested that extra police be called in – such was the interest in the local body election. Voting was close between the two factions with James Hally winning from James Johnson 98 to 93 votes.

Mayoral Nominations
Mr John Gwynneth was the only nomination for mayor and so at a special meeting on 15 December 1886 he became the first to lead the council. This was rather lackadaisical in its infancy as some meetings had to be postponed through lack of a quorum. In the first year the rate of 1/- in the pound was set. This amounted to £353 13/6d. A loan was raised of £3,000. The mayor was voted a salary of £50 whilst the town clerk’s salary was increased to £60.

By 1900 eight mayors had been head of council – yearly elections were the rule in those times. Estimated population was over 1,000 with 250 ratepayers, 688 rateable properties with the value of £7,200 and revenue of £800.