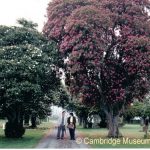 The first burial recorded on a headstone in the Cambridge cemetery, at Hautapu, is Dugald Charles Edward S MacColl who died 6 August 1866 and his wooden memorial can be seen beside the front gate. He was a member of the Alpha Lodge and died of TB. (Robert Wilson was the first burial, 23 June 1866 and he was so drunk he choked on a piece of steak.)

Deaths of many people in Cambridge have come to light through archives, newspaper reports and from family history research. An Armed Constabulary diary at Auckland Archives records also the deaths of Robert Henry Coltman (by A Visitation of God), Shaw, Joseph Cers in 1876 and Joseph McCafferty in 1886.

Andrew and Agnes Robinson (the local hoteliers at the Duke of Cambridge Hotel) are noted on the cemetery map with Andrew having died 7 March 1876 and Agnes 21 March 1876. There is no headstone.

In 1878 minutes were kept by the Cemetery Trustees with James Hally as the chairman. It is recorded in November 1879 ‘Mr W M Shaw be appointed gravedigger if he binds himself not to charge more than 10 shillings each grave.’ The Trustees charged a further 10 shillings for each allotment.

At this time the cemetery was re surveyed by Donald Stubbing and pegged out into allotments. The Armed Constabulary was employed to form a spacious driveway through the centre and to replace the fence of bank and wattling with a substantial one of timber. A newspaper report says ‘The allotments will shortly be open for selection at a nominal charge’.

In 1882 the Government passed the Cemeteries Act which set down rules and regulations for all NZ cemeteries.

Again in 1883 the Armed Constabulary laid out walks, mowed the grass and fern, did plantings and took up the poplars. John Sharp (nurseryman) donated some valuable, servicable and ornamental shrubs.

In 1886 it was decided that applicants would not be allowed to plant trees without the sanction of the committee as the roots were upsetting the grave digging, and that all large trees in the cemetery would be cut down.

In May 1895 the running of the cemetery was vested in the Cambridge Borough Council when all poplars were grubbed out and burnt with the fern and debris.

A vocal debate on whether the cemetery should be a park or garden was well documented in the Waikato Advocate, with the garden winning, and all the cupressus lawsonia along both sides of the main avenue (which were meeting overhead) were reluctantly removed. These let in more light and air for the C. Sempervirens .

Mr John Sharp again suggested suitable shrubs and planted a number of ornamental and flowering varieties. The avenue of camellias which graces the cemetery’s entrance includes the old formal white contessa calini, pale cerise dride, bronachia, grunelli and the rare C. japonica variegata. Some of these trees are well over one hundred years old and along with the camellias at ‘Woodlands’ they are some of the oldest in the Waikato.

In July 1880 an application was made by Rev J Golden to set aside a separate area for the Roman Catholics, and they were consequently allocated 102 plots. In 1883 they were given another two sections. This would be one reason why the earlier rows do not run chronologically. (A note in the Independent of 1966 states that segregating was to be discontinued because of the closer union developing between catholics and protestants).

The coming of the railway in 1884 netted the Trustees compensation of £15 for land but there was concern for the horse traffic. A report in the Waikato Times of a meeting stated, ‘On one occasion, Mr Carter, the most experienced whip in the country, narrowly escaped a capsize owing to his horse taking fright at the train. It was feared that unless another entrance was provided some serious accident would have to be recorded. It was resolved that an entrance should be made from Booth’s road and the necessary gates, etc erected’.

The Cambridge Borough offices had a fire 23 July 1900 and only a map, made from locals’ memories, now survives. The burial register was not started until 31 December 1909 when the Cambridge Borough Council charged £1 for each grave section about 9′ x 6′. In addition the sexton’s fee was payable to the undertaker.

Some of the early stone masons have stamped their mark on the headstones – but many impressive works are anonymous. Many sculptures were imported from Italy with local masons providing the bases and script. In 1904 T Chappell of Hamilton East advertised that he had just imported from Italy some splendid monumental stones in Carrara marble, both carved and in the rough.

In 1912 W J Halliday, on the corner of Victoria and Queen Streets, advised that he was making a specialty of monumental work.

McNab and Mason created a stone for Martin Ashwin who died in March 1901. T Chappel of Hamilton did the Russell family stone in 1912, and erected the pink column for Charles Keeley in 1914. They had a depot in Cambridge in upper Victoria Street.

A E Fisher of Hamilton and J G Allan of Cambridge entered into partnership in September 1953. They served Cambridge as monumental masons for over 40 years and Waikato Stonecraft Ltd continue.