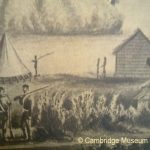 On 13 July 1864 the site for the 3rd Waikato Militia, was chosen. ‘Camp Cambridge’ was named after the Duke of Cambridge, then Commander-in-Chief of the British Armed Forces. It was on both sides of the Waikato River halfway between Maungatautari and Pukerimu.
Surveyors then set to work to measure and form farms, sections, roads and reserves.

It was 11 August 1864 when Colonel Lyon had the headquarters of the 3rd Waikato Militia moved from Pukerimu to the new township. The men were then busy cutting cart tracks and building whares. Tenders were called for huts, stabling for 50 horses, a cooking shed, a smith’s shed, a forage store and loose box.

A fort was built covering five acres of land, on the right bank of the river (Fort Street). The ‘Ten Star Redoubt’ overlooked the Karapiro Stream and commanded a view of the Maungakawa Range and Maungatautari. Formed in the shape of a star, the walls were 4.2 metres high surrounded by ditches 3.6 metres deep. This was a frontier town.

Several of the officers’ wives were already in the town, when the New Zealand Herald of 10 October 1864 reported that a large number of women and children were taken on board the ‘Pioneer’ and brought up to the Coal Mines where they were transferred on board the ‘Rangiriri’ and forwarded to Ngaruawahia. Several of the husbands met them at the wharf at that place and several families for Cambridge proceeded the following day.

Tents were being replaced by thatched raupu whares, cooking was commonly done in a ‘hole in the bank’, most water came from a spring where the Westpac Bank corner is now.

The Karapiro Stream was a popular place for the family wash-day with clothes spread over the bushes and children splashing in the stream. Already three soldiers had drowned in the Waikato River.

The first European child recorded to be born in the new township is Clara Frances Elizabeth, daughter of Charles and Mary Rose. She was born 31 October1864 and baptised by the chaplain for Her Majesty’s Forces, J.A.Welsh Collins, on 27 November. The Museum has an engraved cup which was presented to Sergeant Major Rose by the men of the 3rd Waikato Militia marking this historic event.

The balloting of the military town allotments was a slow affair. Even though the surveys had been finished two months previous, it wasn’t until the new year of 1865 that the soldiers were allotted their town acres and then their farms.

The Herald correspondent reported, “Altogether for a new place like this is, and it being also the first attempt, it went off very well indeed, and quite enlivened the place up; and now that the gentle sex are not so scarce, it was quite a pleasant sight to see so many ladies, not only on foot, but several fair equestrians were to be seen dashing about, so you can suppose civilisation is on the march up here in Cambridge”.

For the first two or three years men formed the greater part of the population. In 1868 this included 866 men, 87 women and about 200 children.

A number of families settled on their farms but with the opening of the Thames gold fields in 1867, many allotments were sold for £5, a bag of flour or a bottle of rum.

C.W.Vennell had published in the Auckland-Waikato Historical Journal his essay ‘Waikato Wives of the 1860’s’ and in this he mentions :-“One of the main problems was isolation. How cut off from civilisation were these original Cambridge families may, perhaps, be appreciated from the fact that the steamer came up the river only once a week. Sometimes caught on a snag or a sandbank, it did not arrive at all.
“While their wives were grappling with their daily chores, which included preparing meals in the open air (for raupo huts were highly inflammable) their husbands were equally hard at work, with pick and shovel and wheelbarrow.”

And so the Cambridge family trees started taking root, building the foundation to the beautiful town we have today.