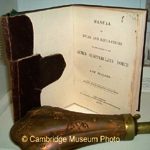 1867 the Armed Constabulary Act was passed in New Zealand and the Waikato Militia disbanded.

Mounted Officers wore Bedford cord breeches and Napoleon boots with hunting spurs. Trousers for Mounted Officers were blue cloth with a double white stripe ¾” (19 mm) wide down the seam. They were also equipped with a sword in a steel scabbard hung on a brown leather sword and pouch belt, a revolver and white buckskin gloves.

Other Ranks wore a jumper cut to cover the waist only, black cloth or blue serge trousers with red piping on the seams, Blucher boots, blue cloth cap with white piping in seams and a white ball on top. White cotton braid chevrons worn on the right arm showed distinction of rank.

Mounted men wore plain blue serge jumpers made full to fall over and tie around the waist, with low cut collar, and shoulder cords of white cotton twist.

Lieutenant-Colonel William Moule raised two divisions of Armed Constabulary and commanded one himself (No. 4 division) with his Headquarters in Cambridge. The other (No. 5 division) was commanded by Major von Tempsky at Alexandra (Pirongia).

Each division consisted of one inspector, two sub inspectors, three sergeants, three corporals and sixty constables. As married men were not eligible to enlist in the Armed Constabulary (and it was mainly married militiamen who had held onto their farms in the Waikato), most of these single men were recruited in Auckland.  The Armed Constabulary now shared jurisdiction with the Auckland Provincial Police.

In 1869-1870 the force was increased to 200 because of the presence of Te Kooti and in April 1870 Lieutenant-Colonel Lyon took command of the New Zealand Armed Constabulary which took over from the Auckland Provincial Police. Their first job was to repair the telegraph communications between Cambridge and Te Awamutu, and Cambridge and Hamilton.

C W Vennell in his book ‘Such Things Were’ says – “In 1871 the force was re-armed with Snider rifles, which were formidable weapons for those days, and were noted for the rapidity with which they could be loaded and fired. Previously the men had been armed with old breech-loading carbines, which were described officially as being ‘limited in range, wanting in precision, and subject to fouling and getting out of order’. When it is remembered that in all their multifarious duties, the members of the A C worked with their weapons along side them, not knowing the minute, or from what quarter, an attack might come, the quality of their arms assumes considerable importance.

“To keep the men proficient in musketry, and also to relieve the tedium of garrison duty and hard physical labour, a target range was constructed on the terrace known as Carters Flat. It gave a maximum range of 800 yards and was later moved and increased to 900.”

The murder of Timothy Sullivan on 24 April 1873 brought renewed tension, and again during the Te Kooti scare families were brought into the barracks at night. New redoubts were built at Pukekura, Paekuku, Roto-o-Rangi, and the ford across the Punui River, but these were withdrawn in 1875 and 1876.

The activities wound down and the Armed Constabulary’s general duties were keeping communications open and making roads, the town constable keeping the peace, law and order, digging gardens, wheeling gravel, fencing paddocks, planting trees, and guard duties. Approximately 22 men were stationed in Cambridge and from the ‘office’ in the corner of the lumber-room, the town constable and watch house duties were administered.

From 1877-1886 the New Zealand Constabulary Force had jurisdiction. The new Bill enabled the constabulary “to act as constables in and throughout the colony, for putting down rebellion, quelling disturbances, preserving the peace, preventing robberies and other felonies and apprehending offenders against the peace.”

The Waikato Times of 4 September 1880 reported, “The constabulary are doing good work on the streets in Cambridge. Fort Street has been very much improved within the passed [sic] few weeks. It has been leveled and a number of the force is at present busily engaged in laying on gravel. Alpha Street west is also undergoing a change. This street has for years sadly been in want of improvement and the present alterations in the level of Victoria Street renders it necessary that something should be done at once.

“Although many of the back streets are sadly in want of attention it must be satisfactory to know that the work of improvement is steadily going forward. The engineer Mr Hoskins is just now taking levels of that part of Victoria Street between the English church and the Government paddock with a view to forming a permanent roadway as well as for the purpose of perfecting the drainage arrangements.

“The circumstance of the newly planted trees being on the present road induces this step more directly, but the work has long been regarded as one of the greatest importances.

“At one time it was almost decided to carry the surface water lying on the roads in the upper portion of the township into a huge well which was to have had subterraneous communication with the lagoon, but the scheme now almost to be adopted into our mind much to be preferred.

“It is also intended to form Lake Street from Mr Carter’s stable to Whitaker Terrace, thus affording additional means of access to the Domain. When the Domain Board shall have planted this portion of their trust it will be a very desirable neighbourhood.”

In 1882 the Armed Constabulary trounced the locals at cricket, the A C doubling the score. Next year the locals made a better showing, losing by only 17 runs. A sports day was organised for the Armed Constabulary before they went out to their summer road works and the A C reciprocated with a Ball. The Public Hall was decorated in a manner altogether unprecedented, no pains having been spared to secure perfection in this as well as every other respect. Dancing was kept up with spirit until daylight.

During 1883 the A C force worked on the Cambridge cemetery, the Karapiro bridge, the town square and Thornton, Rotorua and Oxford Roads. They tended to the upkeep of the Roman Catholic grounds, were commended on their well-kept quarters and made considerable improvements to the rifle range.

Conditions for the Rotorua Road party were described in the New Zealand Herald as “not fit for dogs”. The tents were rotten and there were difficulties getting food to the men.

The need for a hospital for the men was indicated in a letter to the editor of the Times from ‘Sans Peur’. (It was against the rules for members of the Armed Constabulary to write to public journals). He stated that, “40 men – well and infirm – slept in one barrack while the carpenters were kept busy making furniture for the officers.” The editorial in the next issue suggested that “the government wouldn’t have to make retrenchments as the force was thinning out through disease.”

By mid 1884 a full troop of NZ Constabulary Force was no longer required in Cambridge so all movable buildings and most of the personnel were transferred to Kihikihi. Constable William Brennan who had served in Cambridge since June 1876, carried on with policing duties.

By the middle of 1886 the whole Armed Constabulary force had been transferred to the regular police or to military forces, or had been discharged.

On 18 May 1886, a Police Force Bill and a Defence Bill were introduced to Parliament. Both were passed and the NZ Police Force came into being on 1 September 1886.