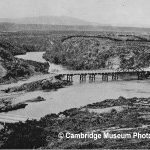 ‘As told by Mr John Scott Fisher, the last man to cross over the old bridge built on the rocks was Jack Fitzgerald. He had come into town and was returning home to Pukerimu, carrying with him an urgent message from the Postmaster. Mr Fitzgerald had been warned not to cross the bridge, but on arrival there he decided to make the attempt, and even then a roaring menace was lapping the planks of the bridge. When going across on his pony Mr Fitzgerald felt the water lifting the planks and he just reached the other side when the whole structure was swept away down stream.’
‘For a time the small settlement of Pukerimu was isolated and so came into use the punt. It carried many at a penny a time.’

‘Another story told by Mr Fisher was that one resident invariably greeted the punt-keeper with a pound note. One day, when asked, “Could you change a pound?” the keeper replied, “Yes,” and handed the surprised resident 239 pennies.’

Early in 1870 the site for a Bridge over the Waikato River was surveyed by Captain Rickards. The river was at a record low level so it was easy to bore holes into the rocks at the bottom of the river to put in the foundation piles. Sub-Inspector Newall and Sergeant Chitty of the Armed Constabulary superintended the job, which was completed in 1871.

On 17 November 1874**(see note below)  the river rose 25 feet in a few hours. The flood lifted the bridge and floated it down the Waikato River to Hamilton , where it was rescued by the Armed Constabulary. The old punt was brought back into service.

Towards the end of 1876 a tender was let to Mr Brittan for a Howe Truss Girder bridge, 144 feet long, 14 feet wide and 12 feet above the level of the original bridge. This became known as The Red Bridge. (Kauri piles were driven into the banks of the river – found in 1962 when the Fergusson Bridge was built). It cost £2345 – the government promising half.

Richard Reynolds was the first to take a herd of stock across the bridge.

The Red Bridge was deteriorating by the end of the 1890s and a bridge on a higher level was mooted in 1899. The Red Bridge was strengthened when Mr McArthur, a civil engineer from Waihi, practically converted it into a suspension bridge for £300. At this time the traffic was made to go at a walking pace and there was a man in charge to regulate traffic. Richard Reynolds campaigned hard for the bridge to be kept open for walking traffic and stock but this was not to be and it was dismantled around 1909. (It is believed that some of the timber is used in the inner chamber of the Alpha Lodge on the corner of Queen and Bryce Streets.)

The Fergusson Bridge has been built on the exact site of the Old Red Bridge (off the end of Shakespeare Street onto SH1) with a three-to-one government subsidy.
The Fergusson Bridge was named after Governor General, Sir Bernard Fergusson, who had family living at the Gorton Estate (Karapiro) in the 1870’s.
This bridge was opened in 1964 with the firm North, Swarbrick, Mills and Westwood winning an award for its design.

**The date of this event is now in question as it is actually reported in the Waikato Times, 14th December 1875, page 2